In China we’ve started to see the emergence of a nascent perfume and fragrances industry. Euromonitor expects this market to grow at a compounded 15% growth rate and reach 40 billion RMB by 2022. Daily average search queries on Chinese search engines are hovering around 215,000, according to Baidu.

And while the industry is dominated by top brands such as Chanel, Dior, and Estee Lauder, demand for smaller niche brands is increasing. We discuss the beauty industry’s increasing focus on perfume, Tmall’s initiatives to promote the industry, and highlight a few emerging brands that are popular amongst Chinese consumers.

Why the Focus on Perfume?

In many cases, perfume and fragrances possess the same characteristics as skincare and color cosmetics. They are relatively affordable, but can be marketed as upscale products, which is why the likes of Chanel and Dior are active in this space. Customers are always willing to try new scents, meaning that the switching costs are low. And lastly, they are relatively light and easy to ship, making it easier to get products to the end customer. This is especially important for cross-border sellers that may be entering China for the first time.

This is why Alibaba’s cross-border e-commerce platform Tmall Global has also doubled down on the fragrances & perfume category. Last year from August 12-13th, it held an “Eye-Opening Day” promotion to expose its customers to imported fragrance brands such as Juliette has a Gun and Maison Margiela. Other brands included Salvatore Ferragamo, Artesian Fragrance, Acca Kappa, and more. 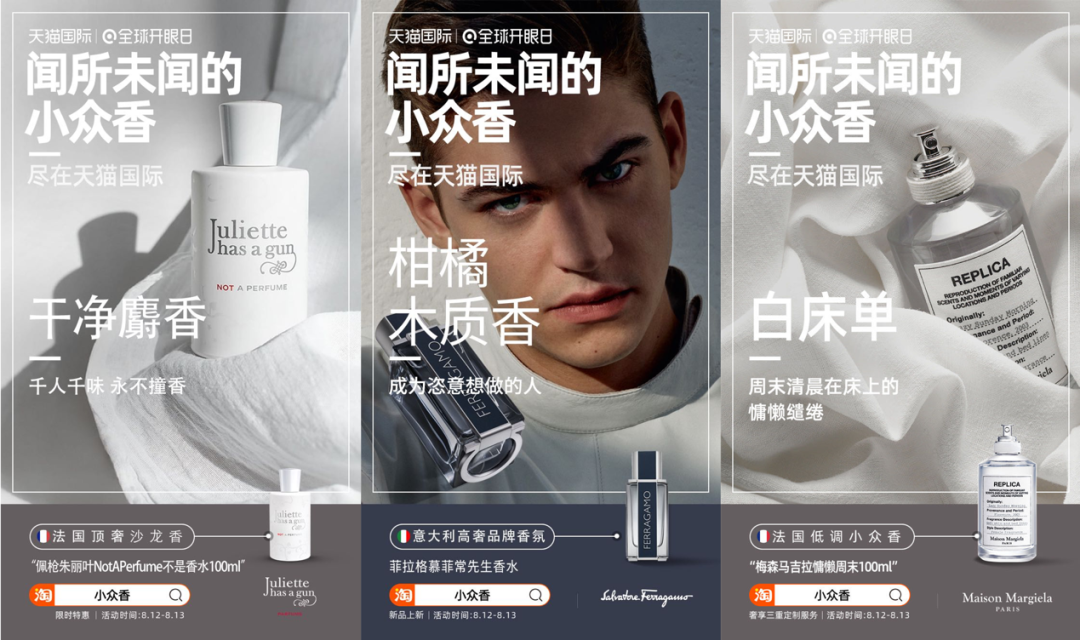 Tmall invited several fashion & beauty influencers to help promote the two-day event, increasing turnover for the respective brands by over 400% YoY. Oftentimes influencers are used to help spread the word amongst their fan bases; each influencer may have different subsets of fans, and brands will use different influencers to target different customers in lieu of using targeted digital advertising options.

Tmall Global announced in April that it planned to add 1,000 new imported brands over the next 12 months, with perfume & fragrance brands as one of its top priorities.

Jo Malone first entered the China market in 2014, later opening a flagship store on Tmall in 2018. It has become popular for its wide range of fragrances, giving customers many different choices to choose from.

As part of its marketing strategy, it partners with many fashion and beauty KOLs to curate content on platforms such as Weibo, Douyin, and Xiaohongshu. On Xiaohongshu alone, there are over 11,000 notes from influencers about the brand, giving customers ample fodder to do research before making purchases. 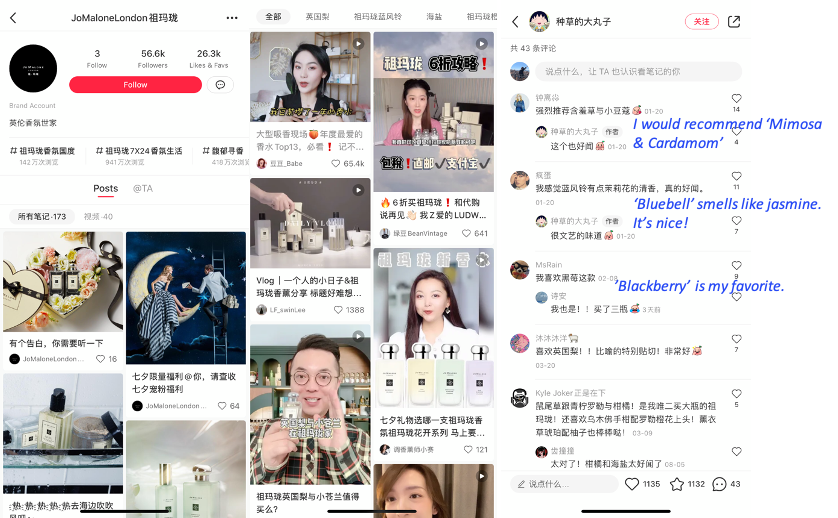 Jo Malone’s official brand account on Xiaohongshu aggregates all of the notes so that customers can find them all in one place; the account has over 56.6k followers. In addition to content from the brand and influencers, the number of user-generated notes has exceeded 70,000.

On August 5th, Jo Malone held a Tmall Super Brand Day, in which Tmall directs traffic and other resources to the brand to drive sales. Jo Malone partnered with influencers such as Vicky Chen and Austin Li. The brand reached #1 status in the perfume and fragrances category; August sales were 18x the previous year’s.

Byredo, a seller of candles, fragrances, and leather-bound handbags, is reshaping the world of luxury fragrances by positioning its products as works of art. Co-branded partnerships have been a big part of the brand’s success; Byredo has worked with IKEA, Off-White™, Acne Studio, Oliver Peoples, M/M, and even NBA star Russell Westbrook to launch co-branded products.

Before officially entering the market, Byredo opened pop-up stores at China’s ritziest malls, Beijing SKP mall and Shanghai’s Plaza 66 mall, in 2018. It later opened its first permanent store at Plaza 66 mall in 2019; the mall is considered to be one of the most upscale malls in Shanghai and many luxury brands have set up stores there. Byredo’s store explains to customers how it goes about manufacturing and designing its leather handbags, as well as its fragrances and other products such as eyewear. 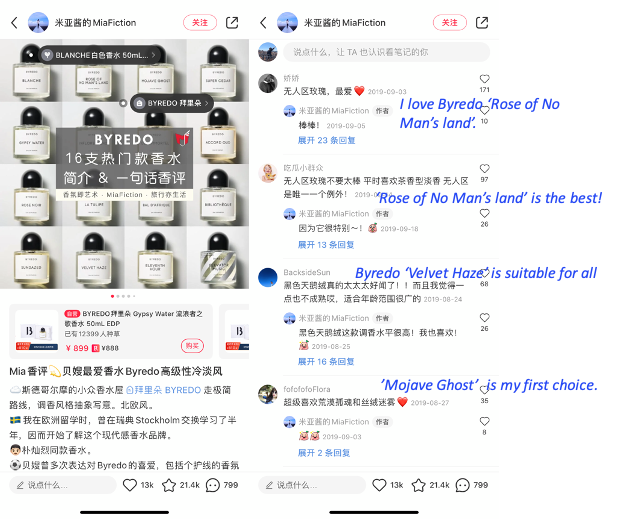 Users’ comments on Byredo under an influencer’s post on Xiaohongshu

There are over 10,000 Xiaohongshu notes about the Byredo brand; customers tend to choose the European brand for its creative aesthetics and unique smells.

1. Perfume is becoming more and more popular in China, and consumers are starting to turn to niche perfume brands. E-commerce platforms are bullish on perfume as the products are mid-priced, easy to ship, and customers are typically open to trying new scents

2. Tmall Global, a cross-border e-commerce platform, has stepped up its marketing and recruitment of imported perfume brands over the last year or two. Newer emerging brands might have a better shot of getting on the platform.

3. Jo Malone and Byredo are two brands that have capitalized on growing demand for perfume. Both have released many different fragrances in the China market, and Byredo stands out for their unique store designs and aesthetics.

What Amazon Luxury Can Learn From China's Cutting-edge Experience?