The Black Friday concluded last week created a buzz in the e-commerce sector: major retailers and B2C platform such as Amazon and Kaola had recorded impressive sales result and increasing number of participants. While Black Friday is still a relatively small online shopping festival in China compared to the shopping bonaza Single's Day, the day represent a huge opportunities for international retailers to reach out to the Chinese customers who have good perception of foreign products, brands and retailers.

Before introduced to the Chinese masses by China's domestic e-commerce businesses, the Black Friday used to be limited to groups of tech-savvy online cross-border shoppers that shop directly from foreign retailers' sites. The day was taken more seriously by the retailers who targets Chinese customers in 2014, when cross-border e-commerce started to take off, and more customers became aware of the campaign.

Why Black Friday, not Single's Day?

Just a fortnight prior to the Black Friday campaign, the entire China e-commerce industry was drenched in the crazy Single's Day sales - and this year, more overseas retailers and brands had participated in the sales bonanza, and Alibaba, again, invited international pop stars to live stream during the sales campaigns to turn the day into a global sales festival.

While there were unusually high traffic to land on foreign retailers' online stores during the Single's Day sales, the day is essentially a day for Chinese domestic brands - who priced lower, supports faster delivery and can sell a lot more. Price sensitive customers natually choose to buy from brands that offer steeper discounts, and as Azoya's Black Friday result shows, customers that made a purchase during the Single's Day campaign this year generally shop 26% less compared to those that shopped during the Black Friday campaign.

It is likely that customers attracted by the Single's Day discount are extemely price sensitive and are looking for instantaneous deals, rather than those that shopped during the Black Friday, who value foreign products from more perspectives, including quality, source of the products, post-sales services, and the value of the price paid. For international retailers, the Black Friday campaign have higher chance to attract trageted and loyal customers.

The Black Friday is easier for international to market their campaigns in China due to less competition from domestic brands and retailers. Azoya monitored a surge of traffic at 10 A.M. on 24th of November and mostly contributed by affiliate programs and deal sites.

Azoya's Black Friday campaigns were joined by over 25 retailers from over 11 countries. Altogether, Azoya's international retail partners brought over 1 million of SKUs, covering beauty, fashion, accessories, mom & baby products, personal care, nutrition and sports categories to the Chinese customers via cross-border e-commerce. The campaign started from the 20th of November and concluded on the 27th of November. 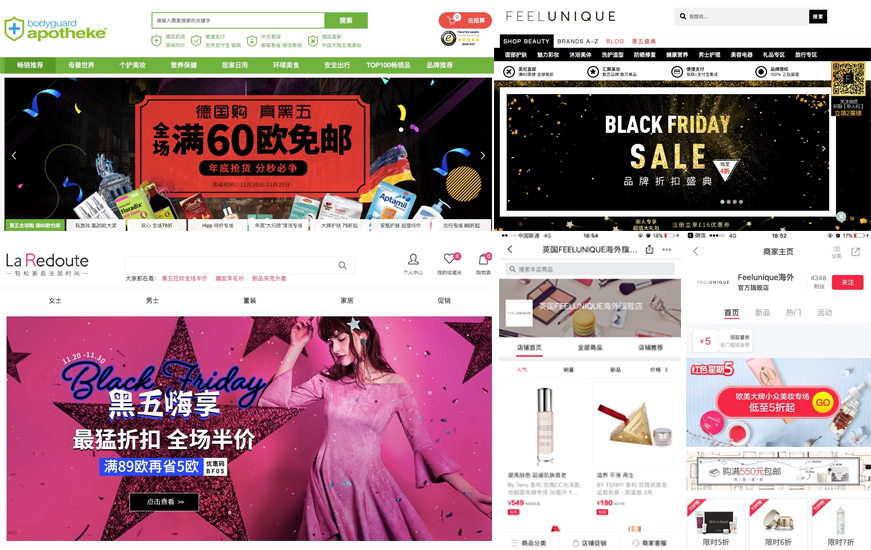 To prepare for the Black Friday sales, Azoya team had been liasing with retailers to prepare stock, securing various marketing channels, collaborating with UnionPay to launch 5 retailers on U Plan marketing platform, and optimizing logistics solutions.