Amazon’s recent move had created a buzz in the China ecommerce industry – the multi-national ecommerce behemoth is recruiting massively for the China market, putting up more than 900 available position over night to meet the talent gap. It has been interpreted by many as an effort to further expand the cross-border service and compete with local giants such as Alibaba, JD and Koala, since big in the Western markets, Amazon has been rather difficult to scale in China.

Embracing cross-border trading and stocking up the China’s free-trade-zone, Amazon is repositioning itself as the ‘go-to’ destination for US made products. Previously, Amazon China was a co-branded with local e-commerce Joyo, one that is now taken over by the Amazon. Seeking growth with the domestic approach has been difficult - the Chinese division of Amazon only accounts to less than 1% of the total market share.

To Amazon, China is not only a market with huge demands, they are also part of Amazon’s strategy to establish the infrastructure of the future ecommerce – providing retail paths to support global sellers to sell their products to ready customers globally. And cross-border e-commerce allows such strategy to happen.

Borderless e-commerce is the new fashion

The DHL report also highlighted that cross-border e-commerce websites usually benefits from a higher basket value of over 50 USD, because international shipping fee is quite expensive. In case of Chinese shoppers purchasing from European shoppers, the number can go as high as 80 to 90 euro as monitored by AzoyaLab. Customers usually purchase in bulk to offset the shipping cost, and it is becoming a common practice for retailers to provide free-shipping for orders above certain threshold.

Though cross-border e-commerce gives business opportunities from new markets, the biggest uncertainty comes from the policies. Some might have even rephrased this emerging trading model as a ‘loophole’ of Customs. Changing of the import duty regarding personal parcels and GST could easily affect the demand of consumers for foreign products. For exmaple, in April of 2016, China customs introduced new cross-border duty and regulations, which had severely impacted the transaction volume of cross-border import, cutting almost by half in the following month. Fretted by the policy changes, many retailers held back their plan to enter via cross-border.

China strategy is crucial, and SEA markets are getting ready 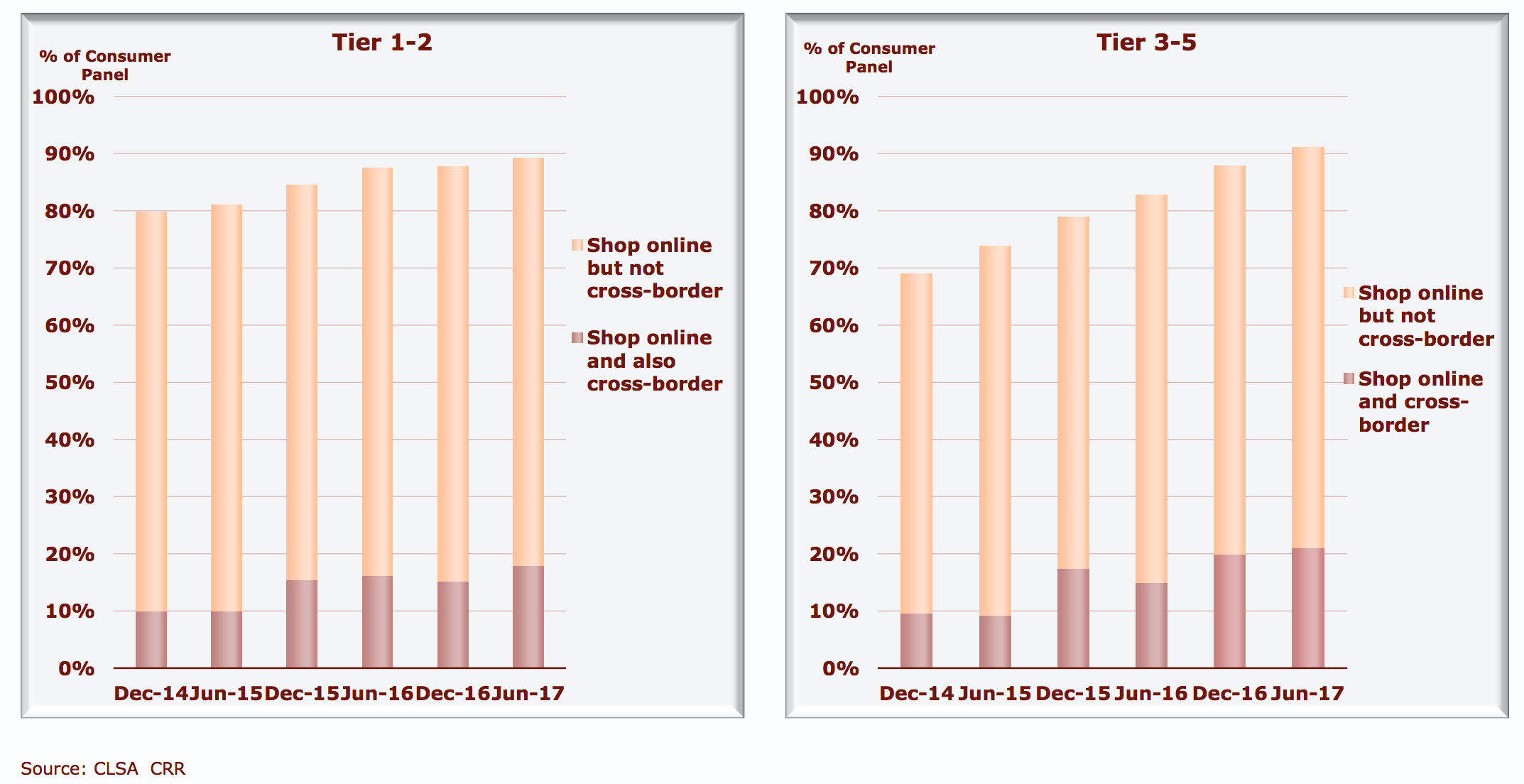 In 2016, the total cross-border import exceeded 900 billion USD. It was estimated that more than 70 million affluent Chinese online shoppers had participated in shopping online from overseas retailers. CLSA research shows that the penetration of cross-border e-commerce is on the rise for both first tier cities and lower tier cities. Online shopper’s criteria for a good shopping experience are also shifting from authenticity and quality, to more personalized shopping experience – they demand quicker delivery, cheaper prices, and more products availability as iResearch's 2016 report shows. For overseas retailers, China is a rather mature market to venture into, and there is still big potential.

With rising internet penetration rate and the warming up of e-commerce in the Southeast Asia, selling to Singapore, Malaysia, Thailand and Indonesia could also be a next step of retailers’ global expansion. Google and Temasek Holdings estimates that the SEA markets will have a 32% CAGR growth of e-commerce transaction volume offrom 2015 to 2025. It is estimated that by 2025, the total online GMV in SEA could reach 88 billion USD. E-commerce infrastructure including logistics and payment had went through rapid development. A Singapore based interviewee shared her shopping experience to AzoyaLab that she once made an online order for vacuum cleaner and received the parcel 4 hours later from Ninja Van, a startup logistics company that had recently raised $60 million for market expansion.

Benefited from a high de minis threshold, Singapore shoppers are exempt of duty for inbound personal parcels valued under 296 USD, making cross-border shopping a highly attractive offer. Malaysia also have a higher de minis value among the rest of the herd at 128 USD. In Thailand and Indonesia, cross-border shopping is becoming more popular because of the lack of availability in local physical stores, and rising demands for foreign high quality products.

At first glance, the SEA online markets are like the early years of China’s online market: penetration of online shopping is increasing but per capita spending is relatively low; they prefer online bargain and are being educated to purchase high quality products; they prefer bank transfer and cash on delivery, and e-wallet market share combat is breeding. There is a huge opportunity to come when shoppers gradually increase their spending online, and integrate online shopping as part of their lives.

Successful retailers have tasted the sweetness of China’s cross-border shopping boom, and the next question is to maintain the volume and look for the next ‘blue ocean’ market. Looking beyond China, the SEA are the next emerging markets for global e-commerce businesses. Cross-border e-commerce strategies will also need to evolve to cater to future trading structure – to satisfy the volume from mainland Chinese consumers by a regional hub in near-shore area that can also fulfill orders to other markets Asian wide. The current point-to-point expansion approach will be replaced by the point-to-multi-point approach, which will help business to capitalize on the e-commerce bonus and quickly establish a digital retailing network Asian wide.

But localization would be important. Retailers need to learn from Amazon’s lessons in China. Localized operation, closer to the customers, data-driven analytics and smart marketing, and willingness to invest in trials and adaptation are the necessary elements to make the equation works.

[1] DHL, 2017, Cross-border e-commerce is one of the fastest growth opportunities in retail