-    China has become the largest mobile payment markets in the world. (McKinsey)

-    Q3 of 2017 recorded 29.5 trillion RMB of the transaction from third-party payment providers. (Analysys)

A recent article from South China Morning Post caught our eyes. The article – China’s internet is thriving even in rural areas – quoted CNNIC’s stats that by the end of last year (2017), up to 47 percent of China’s rural internet users have started to use mobile payment. The figure in 2016 is only 31.7%. Mobile payment and e-payment had grown very fast in China in recent years, says SCMP, ‘light years ahead in the online payment revolution’.

The growing of mobile payment has changed the society from a lot of perspectives, and empowered the digital transformation of the Chinese society – now we see a lot of services and physical merchandises relying on digital platforms to transact, and digital payment is the fundamental of the digitalized business.

In January, WeChat announced to support foreign issued credit cards in the daily transaction with certified local merchants. What it signifies is that the cashless society is no longer just a feast of the 527 million Chinese mobile payment users, but to anyone with a solid digital footprint.

Research company Ipsos’ recent study on Chinese mobile payment habits shows that 26% of the respondents carry less than 100 RMB (around 16 USD), and 14% of the respondents don’t carry cash anymore. Mobile is the new wallet. Always-on consumers appreciate the convenience of ‘going cashless’ by simply tapping their mobile phone to pay for products and services while earning loyalty points automatically. 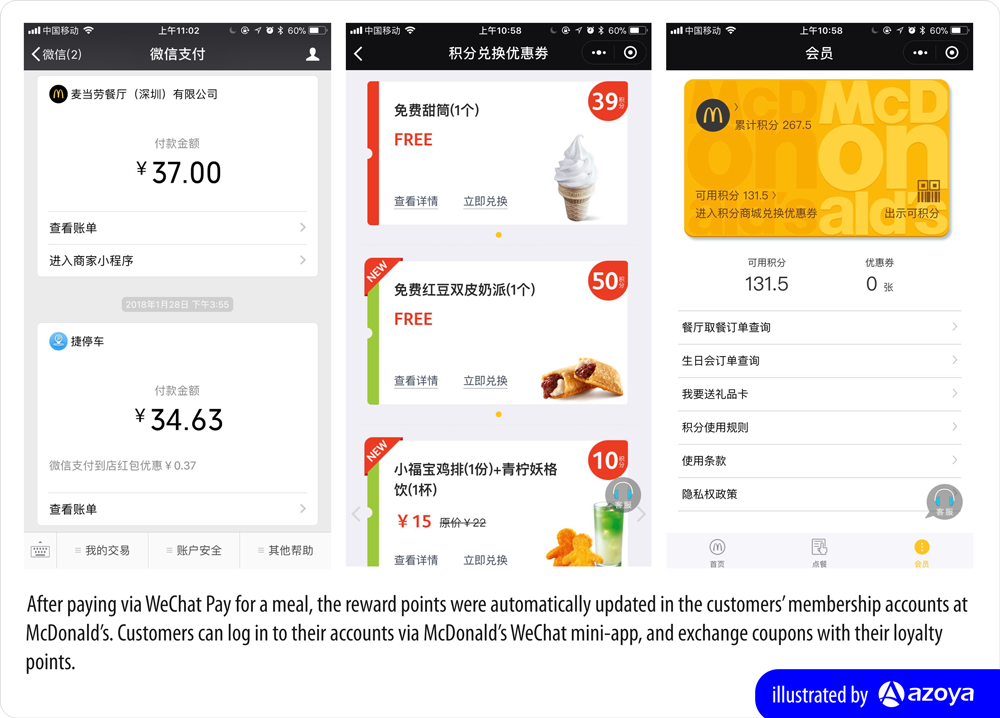 After paying via WeChat Pay, customers will receive a notification from the merchants inviting them to sign up a membership program, rewarding them a coupon for next-time purchase, or simply asking them to follow merchants’ social media accounts.

The new practices enabled by mobile wallet helps retailers tackle the pain points such as unfriendly physical cards, complex procedures to sign up a membership, and the lack of means to recall customers.

The social and e-commerce function of the digital wallets such as WeChat Pay and Alipay are gradually widening the gap with other contactless payment forms, such as Apple Pay, Samsung Pay or contactless cards. The two big players understand that for retailers, creating a relationship with the customers is far more valuable than to simplify the payment process.

For retailers, making the transformation to accept digital payment is merely just to change the POS system, it’s about changing the mindset of doing business in the future.

Cashless has made the transaction easier. Customers are spending more frequently in low to mid-value purchases – such as paying for coffee, breakfast, transportation, etc. The development in fin-tech also allows customers to shop with their credit allowance from the digital wallets – Alipay’s Huabei and JD’s Baitiao are examples.

But retailers should also notice that each transaction with the customers contains more than the currency, but also the potential opportunity to establish a relationship.

To capture the attention of Chinese tourists, we are seeing an increasing number of European retailers starting to accept Chinese mobile payment in store. The advantages are obvious. The customers will not be worrying about not having enough cash or credit card security issues. Customers pay for a transparent price with automatically adjusted currency exchange, saving the hassle of calculating the exchange rate.

Adopting WeChat Pay or other mobile payments also opens new possibilities for retailers to reach customers. To leverage the full capacity of mobile payment, retailers should also consider integrating their marketing strategy and membership program. WeChat’s mini-app function is currently used by over 170 million consumers on daily basis, improving experience such as shopping, checking information, group purchase, etc, which is an emerging tool that retailers should look into.

Adopting one is not enough

With Tencent forming its own version of a retail alliance in China with JD, Carrefour, and Yonghui, the competition between the two alliances will likely escalate.

With daily active users over 900 million, WeChat dominates China’s social media platform. Retailers with exclusivity to Alibaba could likely miss the growing social-commerce trends on WeChat, such as KOL and various forms of social sharing activities. It makes sense for retailers to adopt more payment options as an omni-channel strategy.

Mobile payment is the first step of a series of cashless revolution in the world. With Amazon’s unmanned store launched officially, new technologies such as facial recognition, AI, and AR will bring retail to the next level – the future retail that focuses on data and experience. Selling of physical products or services could take place in various kinds of scenarios, and the omni-channel strategy of retailers should also evolve to cater to different demands.