This article was first published on Azoya's WeChat channel. Check out the new site to see how you can start selling to China through WeChat.

In recent days, hilarious daigou posts have gone viral on WeChat and  Weibo as they highlight some of the desperate measures that are being taken to skirt China’s new e-commerce law.

These posts contain crudely sketched drawings of well-known brands such as La Mer, SK-II, and NARS Cosmetics. Daigou sellers are posting drawings in lieu of actual pictures to avoid recognition software that WeChat could be using to track them. 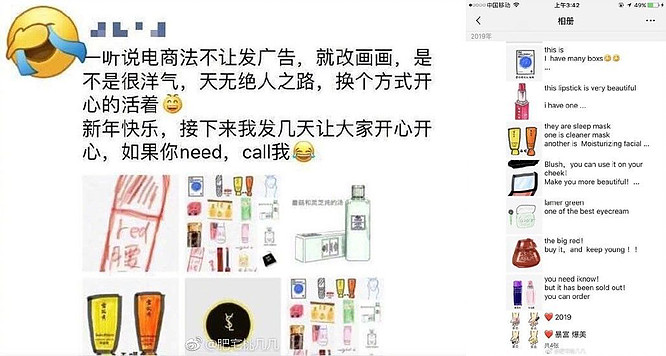 Above: WeChat screenshots captured by 肥宅桃几几, a well-known China influencer

The new e-commerce law, which came into effect on January 1st, cracks down on gray-market daigou sellers by forcing them to register as businesses and file business taxes.

Many daigou are individual sellers who either don’t have the funds to register formal businesses, or don’t want to pay taxes. It’s these players that are at major risk of being caught by the authorities.

And yet it remains to be seen how the government and WeChat/Taobao will be able to supervise the millions of daigou sellers out there, given that many tend to sell from their own personal WeChat accounts.

How the daigou landscape may change

We predict that daigou sellers will diverge into two groups: larger ones that develop their own cross-border e-commerce or dropshipping businesses, and smaller ones that act as pure marketing agents.

These marketing agents will sell on behalf of larger, legitimate daigou or cross-border e-commerce organizations in exchange for a commission. Additionally, expect many daigou to leave the industry altogether.

The decline of the daigou industry bodes well for cross-border e-commerce players such as Tmall Global, JD Worldwide, and other retailers & brands, who sell directly to consumers from overseas warehouses or bonded warehouses in China/Hong Kong.

A business license obtained by an individual seller on Taobao. Source: 老高电商圈子

In recent months the government has lowered duties on cross-border e-commerce purchases and raised the limit on how much people can buy through these channels.

These regulatory changes indicate further government support for cross-border e-commerce, which may increasingly replace daigou as a sales channel over time.