In our last article on video e-commerce in China, we discuss how video platforms are increasingly adopting e-commerce functions and what this could mean for brands' marketing efforts.

Below, we discuss eight different platforms that are trying to bridge video content with e-commerce.

We start with early e-commerce platforms Mogujie and Taobao, who started livestreaming to engage customers.

Then we move on to short-video platforms and social media platforms such as WeChat, Weibo, and Xiaohongshu.

Mogujie and Taobao are e-commerce marketplaces where sellers can use livestreaming hosts to introduce products to customers.

Introduction: Mogujie is an e-commerce platform where third-party sellers hawk apparel to young females between the ages of 15-30. It recently went public on the NASDAQ stock exchange. It started broadcasting livestreaming e-commerce shows in March 2016, pioneering the practice before even Taobao took it mainstream.

How It Works: Users log onto Mogujie's mobile app and WeChat mini-program to watch videos, during which they can purchase Mogujie seller items in-app

Notable Stats: Users spend an average of 40 minutes a day watching live video broadcasts. Today Mogujie livestreams 800 shows a day, with some shows generating as much as 800,000 RMB in transactions in a day.

Below, a livestreaming host shows off a 189 RMB coat to over 95,000 viewers. Viewers can click on items on the side and make a purchase on the spot. 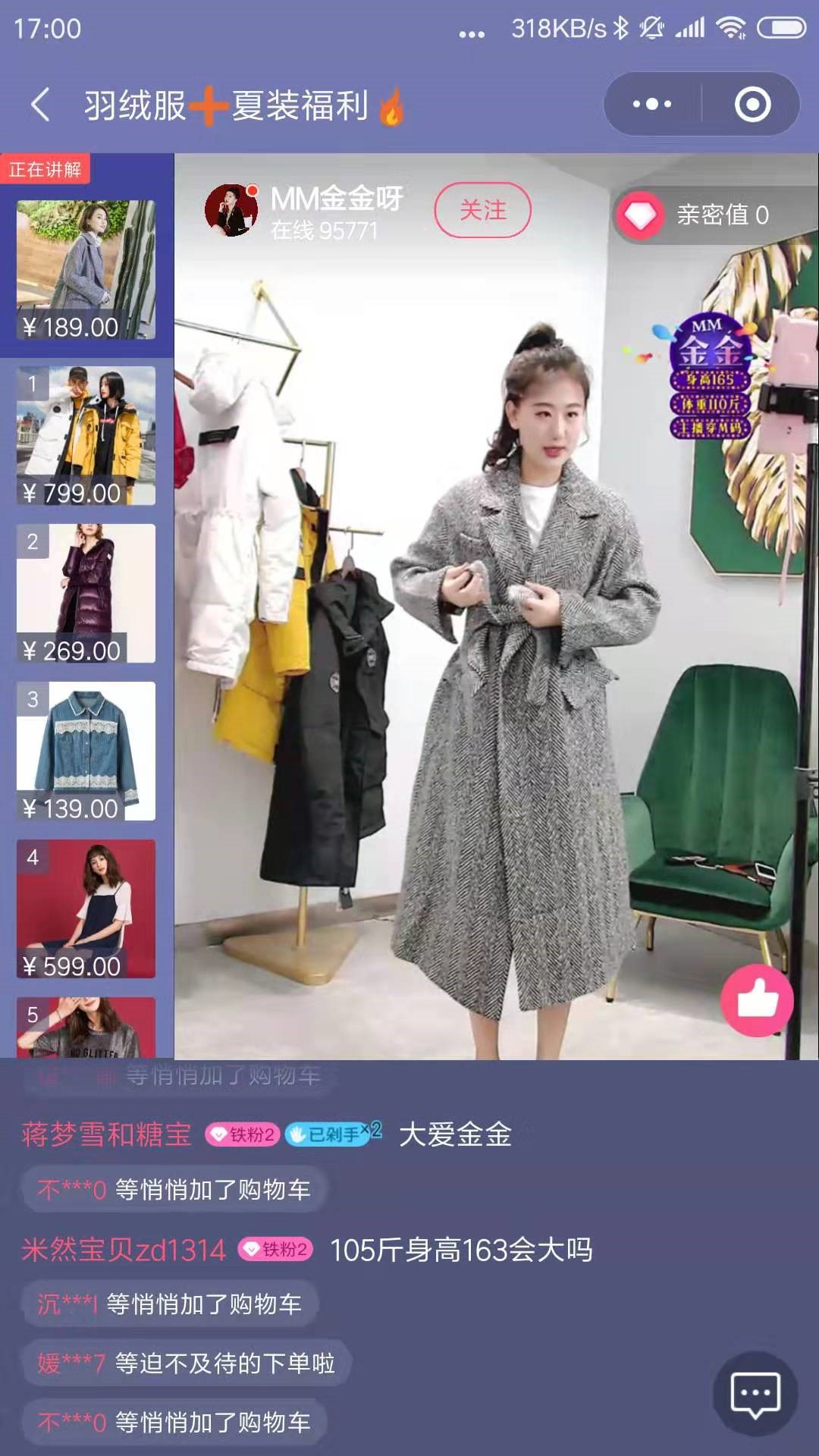 Introduction: Taobao, Alibaba’s primary C2C e-commerce marketplace, is by far the biggest platform for livestreaming e-commerce. While it started out livestreaming apparel products, it has since expanded to everything from jewelry to TVs, electric toothbrushes, and more. Last year, Taobao’s livestreaming shows really took off, generating over 100 billion RMB ($15.1 billion) in GMV, or up 400% from the year before.

How It Works: Users log onto the Taobao app and can click on a livestreaming link to see which sessions are being broadcast. They can then enter a show and purchase Taobao items showcased in the videos.

Notable Stats: Taobao features over 4,000 livestreaming hosts, who generate over 150,000 hours of content on a daily basis. Over 600,000 products are available for purchase during livestream shows.

Type of Brands/Products: Mostly domestic items of low- to mid-value from various categories

Other Notes:  Taobao is now encouraging farmers to perform livestreaming sessions, in an attempt to alleviate poverty in China’s rural areas. It works with various local governments to promote certain crops or fruit. Starting from the second half of 2018, over 50 heads of local county towns throughout China have turned to Taobao livestreaming to showcase their local wares.

Below, a fruit shop owner shows off his selection of red Yantai apples from Shandong province. 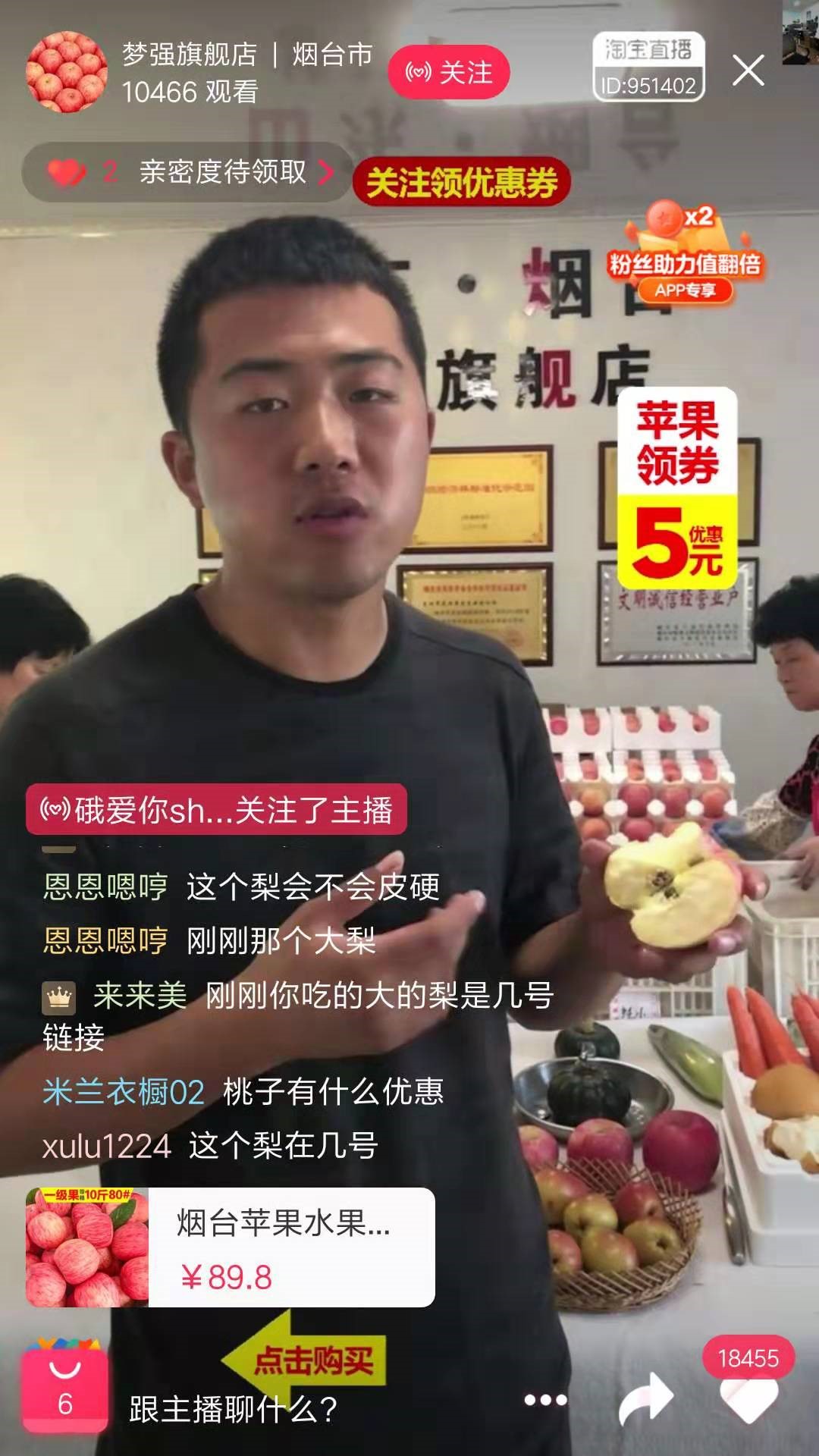 Short, sub-20 second videos are hot in China. Read about how platforms Douyin and Kuaishou are experimenting with e-commerce to monetize their businesses.

Introduction: Also known as Tik Tok in the West, Douyin is China’s largest short-video platform with over 500 million MAUs. It is owned by internet giant Bytedance, one of the largest private internet companies in the world. Douyin began incorporating e-commerce functions towards the end of last year, linking its videos to Taobao items that customers can purchase without leaving the Douyin app.

How It Works: Douyin users swipe up and down on the main interface to watch different short videos recommended by the platform. Some videos consist of KOLs marketing e-commerce products from Taobao. Viewers can click on the e-commerce links inside the video and make purchases without leaving the Douyin app

Notable Stats: During last year’s Double 12 Festival (Dec 12), Douyin videos drove sales of over 100,000 items, resulting in 200mn RMB in sales. The KOLs involved had to have at least ten videos in their history and over 8,000 fans to qualify.

Other Notes: Douyin also worked with JD.com during this year’s 618 festival. Douyin’s user base of younger consumers in smaller cities is appealing for JD.com, which now has to compete with e-commerce upstart Pinduoduo in those regions.

Below, KOL Zhang Dayi sells yellow dresses on Douyin for the 618 e-commerce festival. The yellow shopping cart icon on the left indicates a purchase page. 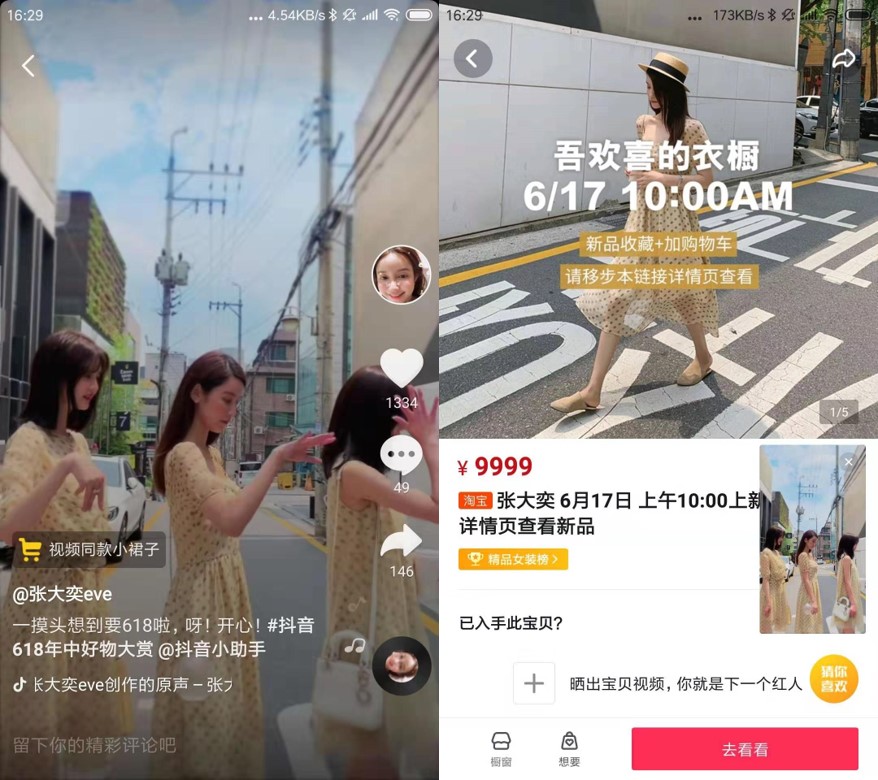 Introduction: Kuaishou is Douyin’s main competitor in the short-video space, with an archive of 10 billion short videos and 15 million new videos being created every day. Kuaishou began offering e-commerce items last year, opting to prioritize locally-made Chinese goods such as food. This makes sense, given Kuaishou’s concentration of users in smaller-tier cities and rural regions.

How It Works: Kuaishou's interface consists of videos recommended by the platform. Once the user clicks into the video, he/she can click on e-commerce links to Taobao items that can be bought without leaving the app.

Notable Stats: For this year’s 618 festival, three KOLs held livestreaming sessions on Kuaishou to promote the sale of red crispy dates from Hebei province on Taobao. The promotion raked in 50,000 orders from June 15-17, bringing in 1.13mn RMB in sales. 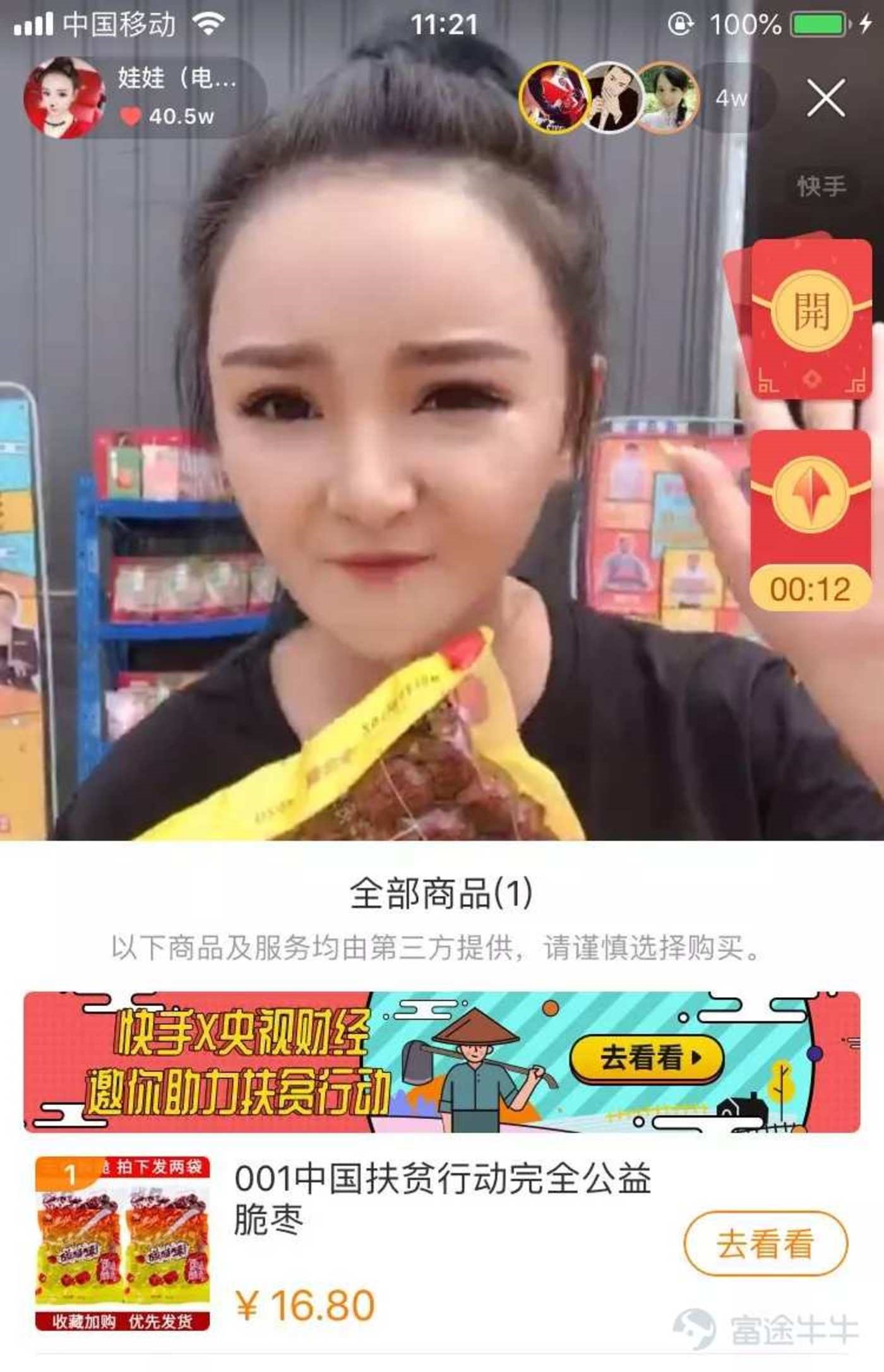 The Leader in Cross-Border Livestreaming: ShopShops

Introduction: ShopShops is a young NYC-based start-up that works with fashion boutique stores in the US to broadcast livestreaming sessions in China. The goal is to connect premium Chinese customers with premium cross-border e-commerce products, particularly in the beauty & fashion space. This helps emerging brands in the US build brand awareness in China before establishing a physical presence there, reducing upfront costs.

How It Works: Users can access livestreaming video sessions through the ShopShops mobile app and WeChat mini-program, and directly purchase items from ShopShops merchants. The hosts tend to have fashion, art, and design backgrounds, and they help translate and answer questions about product fit, material, etc. in real time. All of the products are listed on ShopShops' e-commerce platform and shipped to China through cross-border e-commerce.

Notable Stats: As of mid-2018, ShopShops livestreaming sessions attract ~15,000 viewers and bring in $6,000 in sales per session, though in some cases a session can bring in up to $40,000 in sales. The company is purportedly working with larger brands and retailers than before to achieve scale.

Type of Products/Brands: Imported cross-border e-commerce fashion & beauty products from the US

Other Notes: As you can see from the screenshots below, Shopshops has a much cleaner look than the other apps, making it seem like a more premium, Western platform than a typical Chinese platform. Also note that the products sold are much more expensive, given their imported nature. 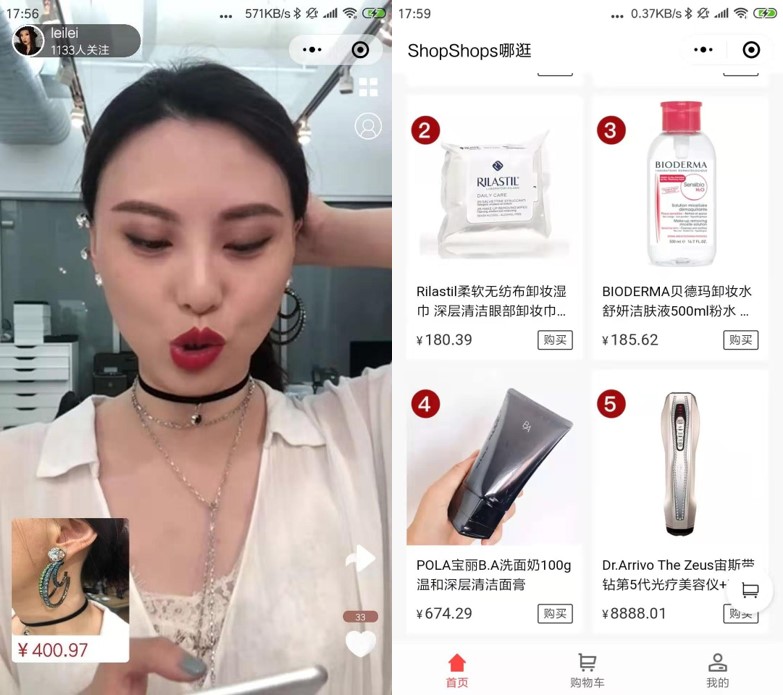 Not Quite There Yet: Xiaohongshu, Weibo, and WeChat

Social media platforms Xiaohongshu, Weibo, and WeChat are valuable because of their large user bases. However, they have struggled with monetization, and advertising options for merchants are limited. Livestreaming and working with KOLs may be one way these platforms intend to monetize their businesses going forward.

Introduction: Xiaohongshu is a popular social media platform where female users share and comment on each other’s lifestyle experiences. It has since become a popular platform for leading KOLs to interact with their fans and review products. It also runs an e-commerce store, which is located on a secondary tab. As of June 10, social commerce platform Xiaohongshu has been testing livestreaming to help drive monetization and e-commerce sales.

How It Works: There have only been a few cases in which select KOLs have started livestreaming sessions to showcase and sell Xiaohongshu products. KOLs cannot sell products from other platforms such as Taobao.

Other Notes: Because of its popularity with KOLs and reputation as the go-to platform for learning about premium products, it makes sense that Xiaohongshu would start experimenting with livestreaming videos to help drive more sales. However, it’s still too early to tell how Xiaohongshu will perform with livestreaming e-commerce. If it limits its KOLs from selling other platform’s items, then the product selection may be too limited. At the same time, if it allowed the sale of other platforms’ items, it may dilute its users’ perception of the premium platform.

Last year, Taobao began testing the incorporation of Xiaohongshu content & product reviews. However, this feature has yet to go mainstream and there have been rumors that the partnership isn’t going well. In recent years, Xiaohongshu’s users have complained that the platform is becoming more commercial, deviating from its original mission to be a lifestyle sharing platform. Balancing the quality of its content and monetization efforts is a struggle that Xiaohongshu will continue to face going forward.

Below, a snapshot shows a KOL demonstrating a beauty product during a livestreaming session. 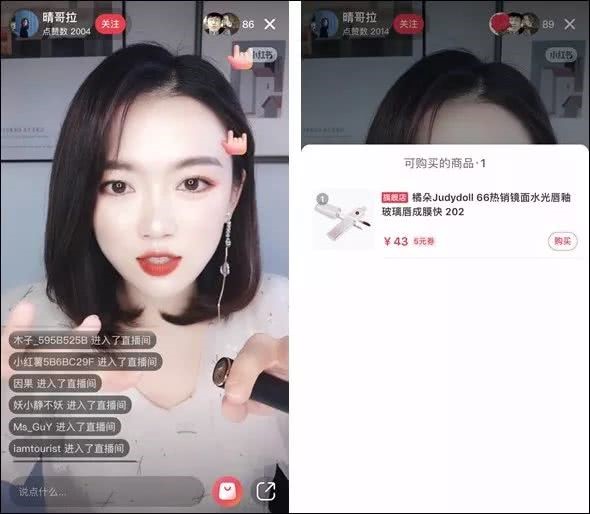 User Base: >1 billion MAUs; general users from all over China

Introduction: WeChat is a relative late-comer to the livestreaming arena, given its relatively closed nature. In WeChat, users cannot see the comments or content posted by users they are not directly connected to, limiting how viral a piece of content can go. In recent years, a number of players have tested livestreaming with their own mini-programs, including L’Oreal, Dior, Mogujie, and more. However, the practice has yet to go mainstream.

In March, Tencent began testing a livestreaming function that enables WeChat Official Accounts to initiate and promote live-streaming sessions with their followers. As of July 2019, the service is still in testing stages.

How It Works: The official Tencent Livestreaming service lets WeChat Official Accounts notify users when a livestreaming session will happen. They can then participate in the session and make purchases without leaving the app.

Notable Stats: The “She read” WeChat account sold over 190,000 RMB in merchandise in just two hours of livestreaming on April 21st.

Types of Products/Brands: Too early to tell

Other Notes: The benefit of livestreaming on WeChat is that brands’ official accounts can continue to send updates to followers long after the livestreaming sessions have finished. While still early to tell, WeChat could be a major game changer for livestreaming + e-commerce, given its large user base.

Introduction: After purchasing livestreaming platform Yizhibo in November 2018, Weibo, China’s largest micro-blogging platform, announced in December that it would invest 2 billion RMB ($290 million) to build out its content-driven e-commerce capabilities. This includes its ecosystem of multichannel networks, online celebrities, actors, entertainers, and agencies.

While Yizhibo livestreaming videos have been incorporated into Weibo’s platform, we have yet to see any e-commerce transactions taking place on the platform, despite reports that it would partner with JD.com to sell products for its 618 festival in June.

How It Works: N/A

Types of Products/Brands: Too early to tell

Other Notes: If it were to happen, it’d be a big deal because KOLs and celebrities tend to use Weibo the most to connect with their fans. Weibo is the most open social media network and has the most widespread user base of all the social media platforms, though it has struggled with engagement.

Video is the Next Frontier for China E-Commerce