Chinese policymakers’ latest talk on cross-border E-commerce regulation reveals that future cross-border import will be categorized as ‘personal article,' which prompted a new round of discussion over future policy in this emerging industry. The canceled implementation of certain cross-border regulations will ease entry process for both brands and retailers, and the news has also boosted stock prices of major Australian health and food retailers.

The Ministry of Commerce’s talk in March of 2017 has redefined cross-border imported products as ‘personal articles,' which implied that future taxation and import clearance policy would be different to that of traditional bulk trade model to sell to china.

On April 8th of 2016, China’s Customs had announced that future cross-border imports should be taxed under general import, which has resulted in a severe market response. Current policy requires order declared through the free-trade zones to pay a consolidated tax ranging from 11.9% to 26.35%, while validation of import permits, registration, and filing are postponed to 2018.

If the cross-border trade is categorized as ‘personal article,' there’s a big chance that obtaining the import permits, registration and filing could potentially be less complex, or removed.

Why is that? Unlike bulk trade business, personal cross-border shopping is featured with low volume, small order, and wide variety. If the Customs is to treat all cross-border import with same ways as the traditional import, the complex procedures will be an intimidating entry barrier, which is a step back to the chaotic ‘Daigou’ era. Therefore, it is highly likely that the ‘Positive List’ could change to ‘Negative List’ to allow entry for more products but with reasonable inspection on quality and credential.

From confrontation to adaptation

Cross-border trade in China has witnessed fast growth in China for the past three years as burgeoning Chinese middle classes unleashing great purchase power, facilitation of international payment and logistics, and regulation approval on cross-border import. Chinese consumers are shopping from the world for premium products that were not on the shelves in mainland China previously.

But the booming of cross-border shopping also triggered the alarm of the local authority --- for every order sold through personal shopping agents (also referred to as ‘Daigou’), there’s potential loss of tax revenue in import, transportation, and sales. Other issues such as the lack of quality inspection and impacts to traditional import and distribution network were also irritating the nerve of policy makers.

On April 8th, the Authority released new taxation policy and import permit requirement, and the latter one was devastating to the industry since ‘positive list’ regulation approach barred out a lot of qualified products. But fortunately, the import permit was lifted effective until 2018 and will likely to be revoked.

A 2015 research by ContactLab had identified China as high outflow and low inflows regarding luxury products, due to the heavy tax rate and lack of SKUs in domestic markets. Thousands of shoppers from China once lined up in global brands’ overseas physical store to purchase new arrival. “When you see someone in a store, you don’t know whether they are buying handbags for themselves or to sell them onto the market in China,” Says CFO of LVMH in a 2015 interview with BOF.com. 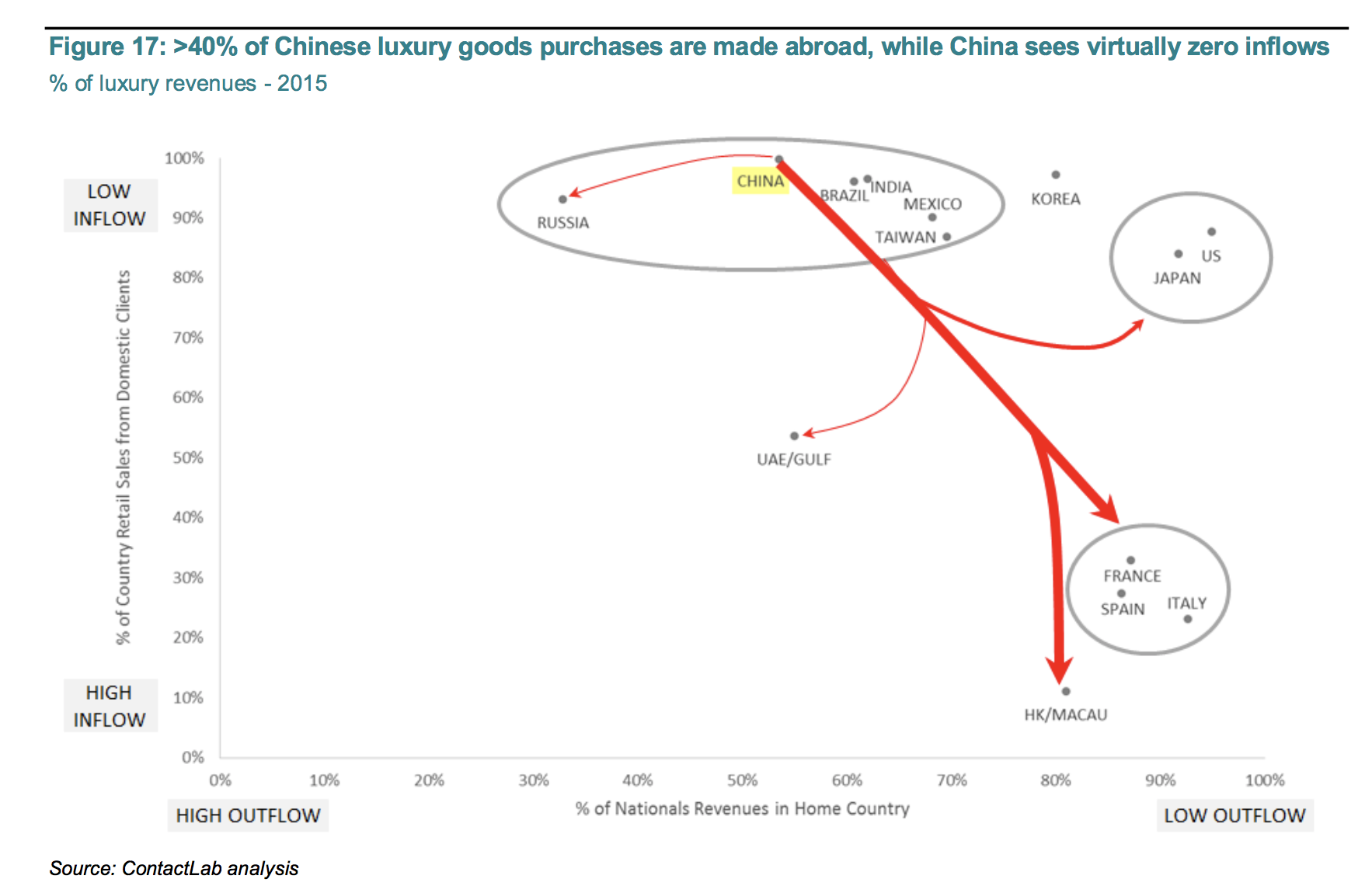 Cross-border E-commerce enables retailers and brands to sell directly to China with lower tax and competitive price, and the cross-border shoppers are shopping for quality, affordable premium and assurance for authenticity. 3rd party researcher CIW estimated that the number of shoppers would reach 740 million in 2018. Even if there is a 20,000 RMB cap annually for every Chinese citizen, the possible cross-border E-commerce market volume will still be trillion USD.

China’s lucrative consumption market and the prevalent mobile shopping habit are good news for overseas retailers, as they can enter the market via cross-border E-commerce with a modest investment. While Daigou can still serve as a potential channel for distribution, many brands had expressed concern for Daigou’s damage to the brand image. Bellamy, an Australian baby formula brand, has decided to abandon the Daigou distribution network and sell directly to Chinese consumers, while surprisingly discovered that customers still have high loyalty to their products.

For both retailers and brands, the digital transformation could be the future as we are seeing new brands and retailers entering China without setting up their physical entities in China. With accurate localization and E-commerce strategy, overcoming challenges of cultural differences and different commercial environment, global businesses can still expect a good result from their export business to China.