SMZDM.com, one of China's largest sites for affiliate e-commerce content, has just listed on the Shenzhen Stock Exchange, having raised 330 million RMB in proceeds.

Its IPO has drawn attention to its affiliate business model, which uses content to drive traffic to e-commerce platforms, in exchange for commissions and advertising revenue.

We discuss how SMZDM fits into China's e-commerce ecosystem and why affiliate sites play such an important role today. 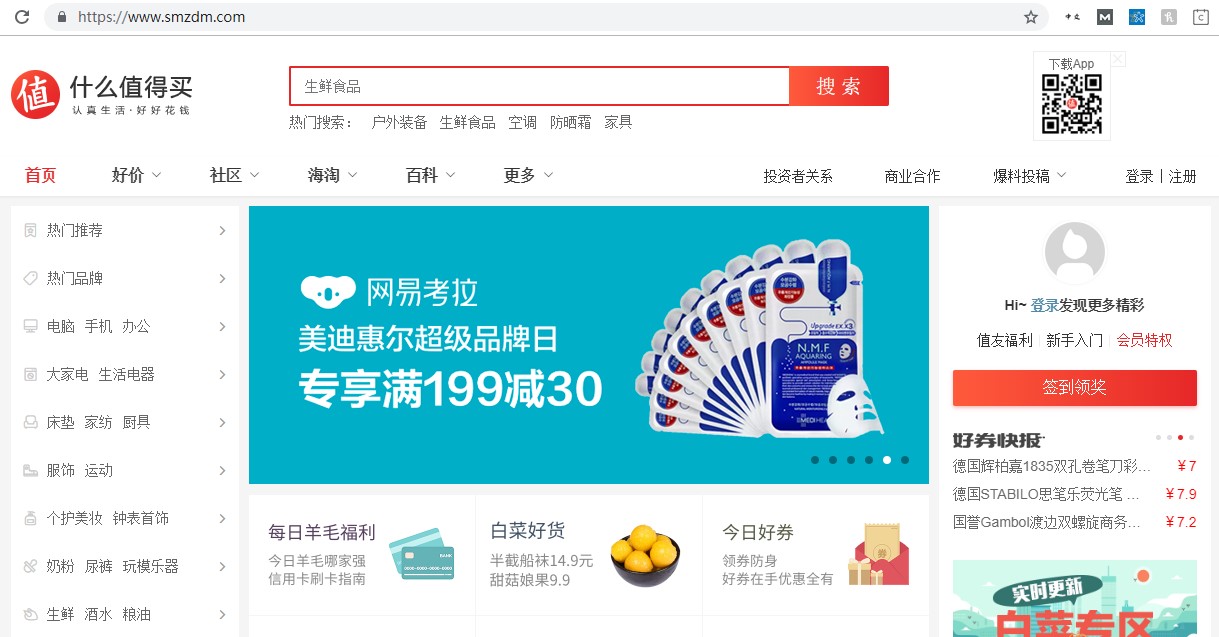 SMZDM (什么值得买, or “what’s worth buying”) originally began in 2011 as a blog that reviewed electronics products, and slowly grew into one of the largest affiliate content sites in China.

Affiliate sites like SMZDM consist of content – articles, reviews, and information about third-party products and sales promotions. However, they do not sell products themselves. Instead, they redirect users to products on e-commerce platforms in exchange for a commission, which can range from 5-40%, depending on the category.

SMZDM generated a whopping 507.6 million RMB in revenues in 2018, up 38.4% from the previous year and more than double that of 2016’s. Its revenues are derived mostly from commissions. 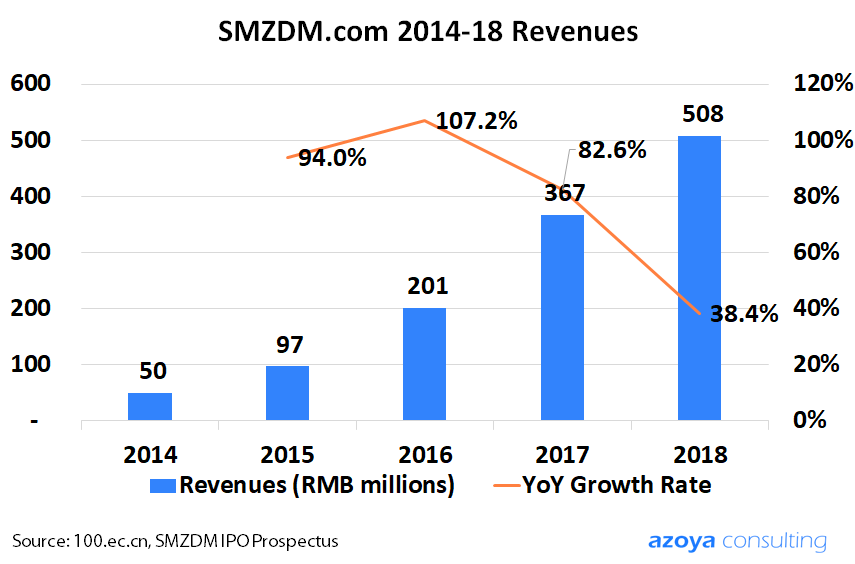 On Singles Day alone, SMZDM drove 943 million RMB in transactions on third-party sites, with an average basket value of 100-150 RMB per customer. It also boasts around 26.5 million monthly active users (MAUs). The company has partnered with over 10,000 brands, 7,000 independent websites, and over 150 e-commerce platforms around the world.

SMZDM’s content is divided into three categories: “Good Prices”, “Good Products”, and “Good Articles”. Content can be posted by both advertisers and users; good content with likes and comments move to the top of the rankings.

They can vote on each posting as "worth it" or "not worth it". Users frequently come back to SMZDM to browse articles, learn about impending sales, or just look around.

SMZDM will use proceeds from its IPO to invest in more sophisticated big data analysis & targeting technology, so that it can better recommend content to users.

The affiliate marketing model is not a new concept. In the West, platforms such as Clickbank are quite common and do a good job of driving traffic and transactions to Amazon products.

But in China, there is a bigger trust issue that needs to be overcome in the e-commerce world. There are more fake products and product reviews in China e-commerce, and customers are more likely to doubt the authenticity of product listings on marketplaces like Taobao.

This is especially the case with imported cross-border e-commerce products, where customers conduct more research because of the higher prices.

In January, a customer accused Netease’s Kaola platform of selling her a fake Canada Goose jacket; her dispute went viral over the Chinese internet. Such product quality scandals are common in China.

Independent affiliate content sites like SMZDM play an important role by aggregating good, impartial content that people can trust and rely on to make purchasing decisions.

Because of this, conversion rates on SMZDM average around 10% and the customer base is considered to be of much higher quality. 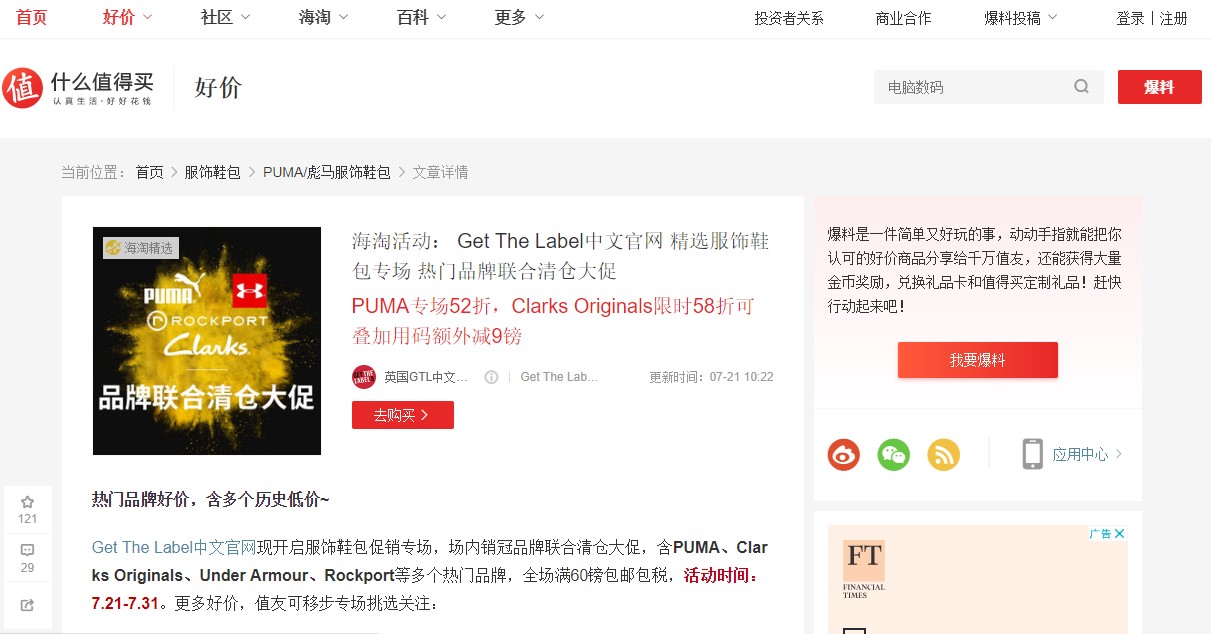 A promotion on SMZDM for Get the Label, a UK retailer. Source: SMZDM Official Website.

In China, users tend to purchase on marketplace platforms on Tmall and Taobao; their parent company Alibaba was the first to pioneer e-commerce in the early days of China’s internet industry.

But now, more players are moving to build their official brand websites as they realize the difficulty of educating and retaining customers on crowded platforms like Tmall. Not to mention, the fees for large platforms can be quite high, running into the tens of thousands of dollars range.

These users are more trusting, higher quality, and more loyal, because they have already been “cultivated” by the content on these affiliate sites, which are considered to be less “commercial” and more trustworthy.

Once the users are redirected to the brand sites, the brands can push loyalty programs and promotions, and convert them into long-term customers.

This is important because as China’s e-commerce industry matures and user acquisition costs rise, e-commerce players will focus more on retaining customers and increasing the lifetime value of each customer.

Even merchants on Alibaba and JD.com use SMZDM for affiliate marketing, underscoring how effective these affiliate sites can be at driving transactions.

Little Red Book's community platform revolves around Pinterest-like pictorial posts that encourage commentary from fellow users. The user base is predominantly affluent females between the ages of 18-30, who browse the platform to discover new products in cosmetics, fashion, and more. KOLs have become particularly popular as of late as brands look for a more intimate way of connecting with users.

SMZDM, on the other hand, is different in that most of its user base is male, between the ages of 25-34, and with an average monthly income of 8,000 RMB.

This means that a lot of the products on the platform tend to be electronics, apparel, and other random categories. However, there is an overseas shopping tab that consists primarily of imported cross-border e-commerce goods, sold by the likes of UK cosmetics retailer Feelunique, Australia's Pharmacy Online, and Germany's Bodyguard Apotheke. These products are typically cosmetics, health, and maternity & baby products.

So, the breadth and range of the products on SMZDM are much wider than they are on Little Red Book, which caters to females and tends to retail products such as cosmetics and apparel.

SMZDM merely directs users to products on third-party websites in exchange for a direct CPS commission. The product pages are separate from the content pages, which makes it a little more trustworthy in the eyes of consumers. Nevertheless, Little Red Book is still superior when it comes to targeting female users.

1.      SMZDM and other affiliate marketing sites use quality content to drive traffic and sales to third-party e-commerce sites, in exchange for commissions. This content can consist of product reviews or information about promotions, and can be posted by both regular users and merchants.

2.      Affiliate content helps build trust with Chinese users, which is important because there is more e-commerce fraud in China than in overseas markets

3.      Since the market is getting more competitive and in-platform ads on Tmall/Taobao are becoming more expensive, using third-party content to build trust with and retain customers will be important going forward.

Why Most Foreign Brands Become Popular in China Because of Influencers

A complete guide to “Private Traffic” for China retail in 2021