Amid the resurgence of COVID-19 cases in China and external uncertainties throughout the spring, the annual 618 shopping spree kicked off in China in late May. This mid-year sales festival is viewed as a refreshing opportunity for brands to boost their 2022 revenues. 618 is expected to play a critical role in encouraging consumption recovery, stimulating consumer confidence, and bolstering the economy.

In this article, we highlight how e-commerce giants support retailers, how mainstream marketplaces perform, and the key trends fuelling consumption.

Early in May, Tmall, JD.com, and other e-commerce platforms announced their policies for this year’s 618 event. The rules and mechanisms set up for consumers and merchants this year are more appealing than in previous years.

Through the 618 Merchant Conference, JD.com released 30 new initiatives to support overseas merchants for better performance during the June 18 campaign. For U.S. merchants that debuted through the e-tailer’s collaboration with Shopify, the campaign will provide preferential benefits.  JD.com provides key account merchants with a variety of supporting resources, including exclusive traffic, special promotional activities, and participation in JD Worldwide's "Overseas Direct Purchase" campaign.

These initiatives are in addition to JD waiving deposit and platform costs.

For more exposure, items identified as potential bestsellers will be featured in the cross-border marketplace's "selected product pool." JD will also provide unique incentives and a variety of newcomer advantages to Shopify shops' first-time customers.

618 is one of the biggest shopping festivals of the year and presents the ideal stage for merchants to showcase high-quality products to JD’s 580 million customers in China.

Alibaba’s e-commerce arm, Tmall, also disclosed incentives to support merchants on the platform, aside from 25 merchant policies, covering 5 aspects: financial subsidies, logistics enhancement, traffic subsidies, special measures for the pandemic, and technology upgrades.  In addition, merchants will receive around RMB 10 billion ($1.5 billion US) in deposits from customers during the May pre-sale period to secure their orders. The remaining portion of up to RMB 100 billion ($15 billion US) will be delivered to enterprises once shipping begins between June 1 and June 30. 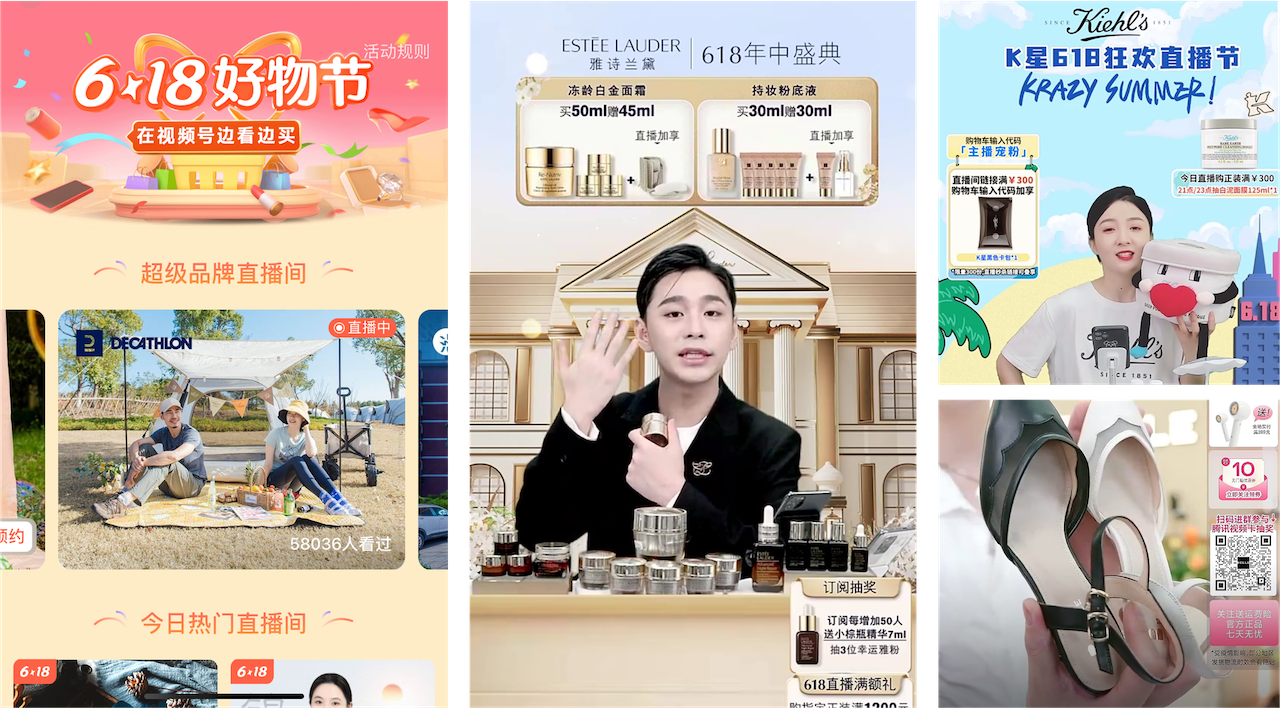 A dozen of brands have launched livestreams on WeChat Video Channels

This is the first time that Douyin has been officially involved in the 618 e-commerce battle. Thanks to the platform’s wildly popular short-form video content, Douyin is rapidly eroding market share from mainstream e-commerce giants, Alibaba’s Taobao Tmall and JD.com.

The ‘Douyin 618 Good Products Festival’ will take place from June 1 to 18. During the period, Douyin will offer discounts on platform service fees for merchants, brands, and livestreamers. 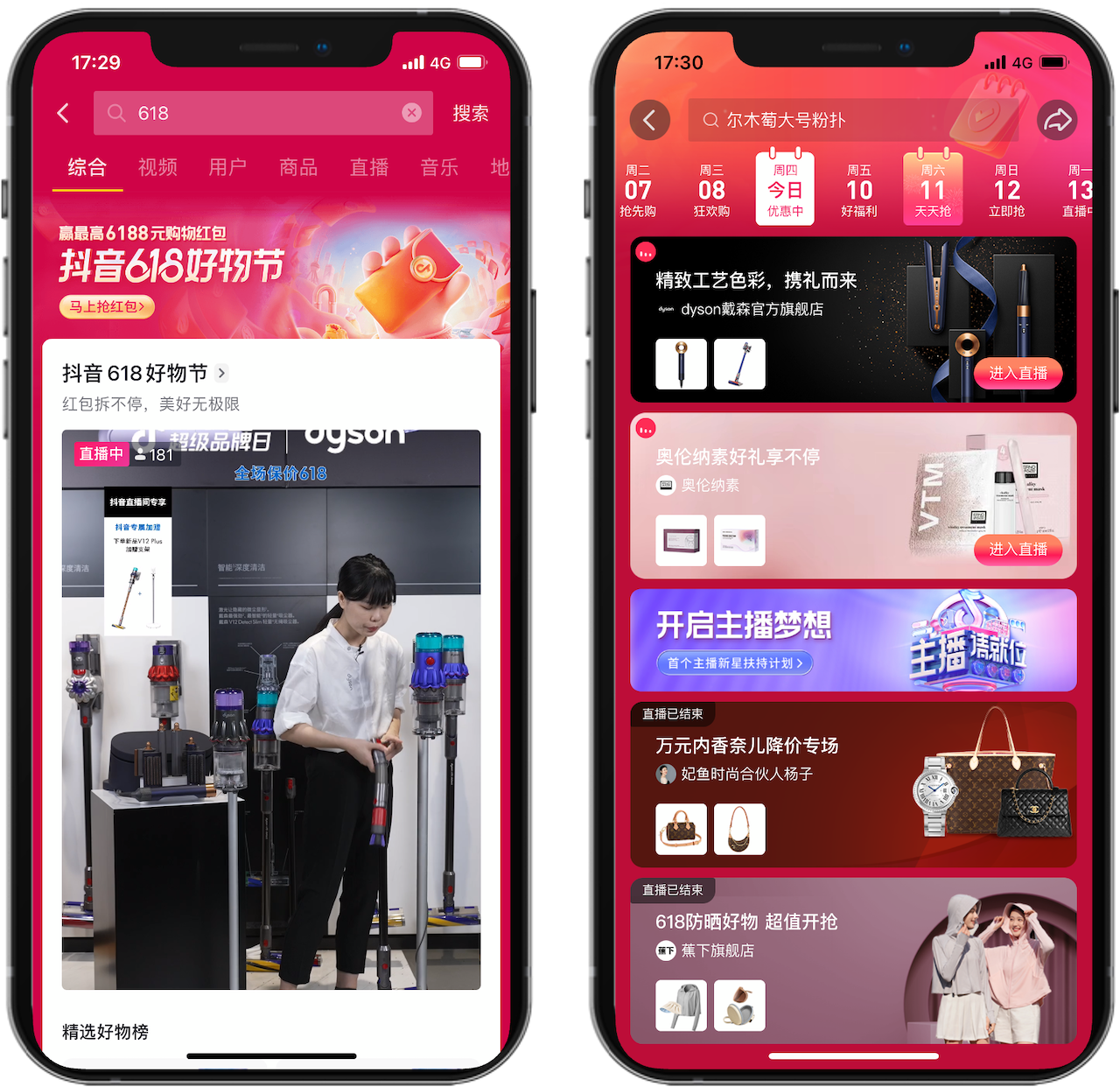 Customers and influencers stay tuned to 618

Despite inflation rising above expectations, customers show strong demand and a willingness to make purchases during the mid-year shopping festival. They plan to buy products for themselves and their families. On the social media platform Little Red Book, the number of search results for “618 2022”, “when 618 starts”, and “What to buy” have reached 14k, 230k, 28k respectively.

On social media platforms, key opinion leaders (KOLs who act as influencers) in different industries are sharing their ‘must-buy’ checklists, ranging from beauty, fashion, nutrition, lifestyle, and pet goods, among others.  Chinese consumers love this type of format. The shopping checklist can save a lot of time and energy on product discovery, so consumers can make quicker buying decisions without having to do research on their own. Shopping checklists are also a great medium for new brands to create awareness among their target customers.

Consumption recovery behind the figures

JD’s 618 Grand Promotion saw signals of recovery. As of the pre-sale day (May 23), the JD home appliance sector garnered a soaring increase of 270% in the pre-sale deposit amount, compared to last year’s 618 event. Among them, the pre-sale order volume of mid-tier and high-end products accounted for more than 60%.

The number of merchants and products participating in pre-sales marketing has increased by more than 50% and 2X respectively. Top categories include apparel, home, beauty, sports, key account luxury watches, and small and medium-sized merchants.

Customers are used to preferring stocking up on products during the promotion. For example, in the first 3 minutes of the pre-sale day, JD beauty sales exceeded last year’s pre-sale first day for the whole day, and the overall pre-sale order amount increased 200% YoY.

As of May 29, JD data shows that the order volume of health and service consumption "all-scenario" pre-sale period of JD Health increased 186% YoY.

International products from all over the world have had a good showing as well. During the pre-sale period, JD's own imported health care products’ pre-sales order amount increased 140% YoY.

One notable highlight is how the designer fashion category has boomed. Pre-sale order amounts for more than 20 brands, such as Chopard, Tory Burch, and MCM, increased by more than 100% YoY.

On the evening of May 26, the 2022 Tmall 618 pre-sales events officially debuted. Livestream celebrity Austin Li’s livestream campaign, which brought together major brands, became the highlight of the day. Li initiated his 618 livestreaming at 4 p.m. (China time), and there were over 2 million viewers who joined the campaign within 20 minutes.

JD.com takes the center stage of the 618 gala once again

Amid the destabilizing factors and uncertainties, JD.com did set a new record ever, hitting a new high and creating the strongest consumption trend this year.

This e-giant attributes the milestone record to the company’s solid supply chain capabilities.

Douyin’s official first 618 festival was a success. Douyin e-commerce revealed that, from 1st to 18th June, its livestreams totaled 40.45 million hours, and short videos linked to shopping carts were played 115.1 billion times. During the whole 618 gala, Douyin’s Shopping mall scenarios led to a 514 percent year-on-year increase in sales, and the number of merchants participating in 618 soared 159 percent year on year.

To add, Douyin emphasized that the post-0ps group has become the new force of 618 consumption, demonstrating a 164 percent year-on-year growth in purchase volume. The most critical sales have not yet been announced.

In contrast to its rivals having created a big scene to celebrate 618, Alibaba’s Tmall 618 festival seems a pretty low-key affair. So far, Tmall hasn’t announced further details on total GMV, category growth, and ranking. According to the latest figures from Tmall, there were more than 260,000 brands participating in Tmall 618 this year, with nearly 300 brands with a turnover of over CNY 100 million (USD 12.74 million).

When 618 comes to the end, JD.com and Douyin have made it to reinforce their influence in the e-commerce market. For Singles’ Day bonanza in the second half of the year, it is the critical period to expect significant shifts within the market.

After all, the e-commerce battlefield is not about who has the highest peak, but who lives longer.

China’s municipalities are also giving out monetary incentives to encourage consumption. Since the beginning of this year, the Shenzhen government had issued several rounds of consumption vouchers in format of digital blockchain RMB to stimulate consumption at local offline retailers.

Since the Labor Day holiday in May, Shenzhen started to issue 500 million RMB ($74 billion US) worth of consumption vouchers, for its citizens to use for offline catering consumption and online shopping. Just 5 minutes after the campaign began, every coupon was taken. 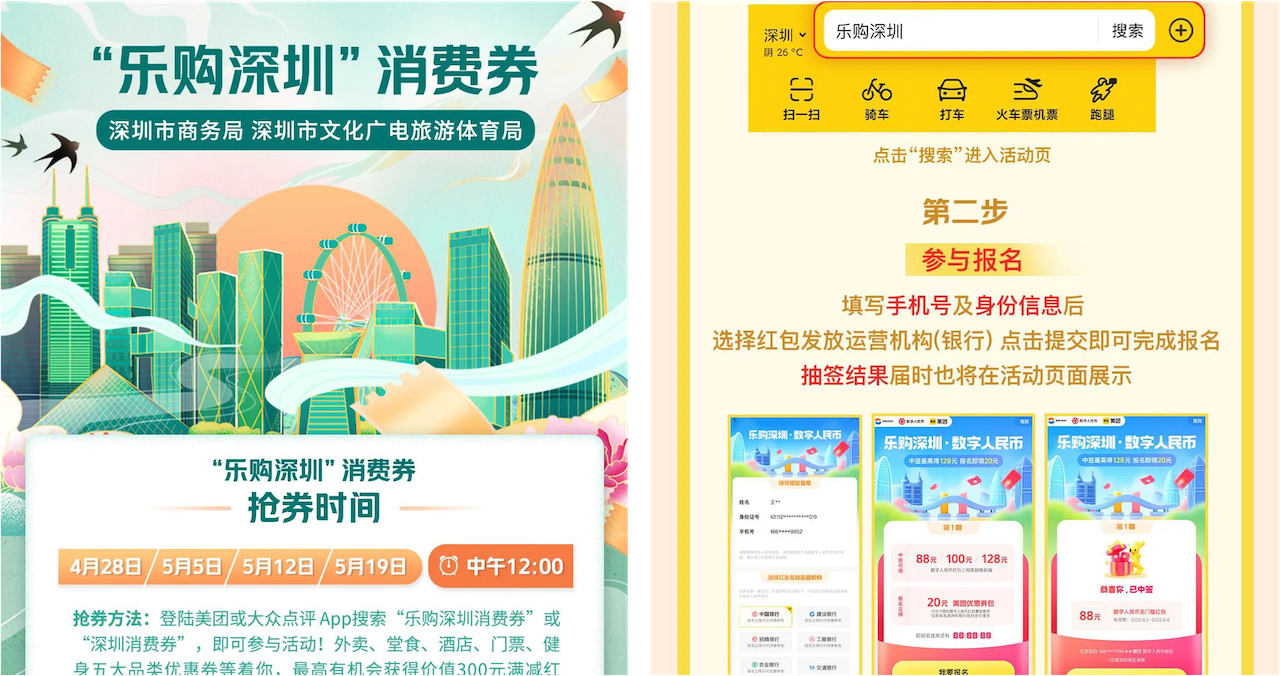 The Shanghai city government also rolled out similar initiatives, issuing tens of millions of RMB worth of coupons for its residents to use at CapitaLand Group 8 shopping malls throughout the city from June to July. On June 1, Shanghai’s shopping centers and department stores resumed offline operations.

Eyeing the long-term potential of the China market

After seeing market uncertainties and a slowdown over the spring, many international brands may hesitate and raise the question, “Is it the appropriate time to enter the China market?”

The China market has long been the largest e-commerce market in the world. There is no reason to lose confidence in the long-term health of China’s consumer economy. Just after the opening of JD’s 618 promotion, high-end beauty houses La Mer and Armani Beauty debuted their JD.com flagship store on May 24 and 25, respectively.  Tmall data announced the turnover of 300 new brands doubled for three consecutive years. And this B2C leader, Taobao Tmall, aims to cultivate 100 super categories with a user scale of more than 100 million.

In May, several cosmetic giants, such as P&G, Estée Lauder, Amore Pacific, and Shiseido revealed their latest earnings reports. Although Q1 results in China showed a rare decline of varying degrees, they remain confident in the resilience of Chinese consumers and the untapped opportunities driving investment in the market.

For brands, China’s middle-class population continues to grow steadily, providing the impetus for the continued growth in consumption and emerging demands. Yet this opportunity is left only to those who are prepared.

The figures from marketplaces show that brands haven’t slashed their efforts in connecting with consumers during this competitive shopping event. It may be better to take a longer-term view and take this tough period as a marketing opportunity to sharpen the growth of the brand and refine its long-term resilience.

All Eyes on China, as Offline Multi-Brand Beauty Stores Boom