This comes as many luxury brands launch lipstick lines to appeal to millennial shoppers, who aren’t able to afford flagship handbag products but may do so as they grow older and as their incomes rise over time.

Priced at US$67 per stick, the 24-color collection is not cheap. Though the product line is not yet available in China, gray-market daigou sellers have been marketing it aggressively.

But soon after its launch, top KOL Austin Li gave a devastating review of the product line on his Taobao livestreaming channel in late March. 13 million viewers tuned into the session, underscoring just how broad of a reach Mr. Li has in China.

While Mr. Li commended the products for their exquisite design and high-quality texture, he complained that the color scheme was out of date and not suitable for Chinese consumers.

He expressed serious reservations about the product line, doubting that a certain shade lived up to its claims to be "the best-looking shade in Hermes’ product line", adding that "the collection of shades look like a painting palette" and that "this lipstick line doesn't have any special characteristics; its just average".

Even after counterarguments from his assistant, Mr. Li bluntly stated that he wouldn’t spend $67 on this product.

This wasn’t the first time that Mr. Li has made headlines for criticizing a brand. In February, Austin also delivered a scathing review on Chanel's latest lipstick collection, saying that its product line was out of date.

Just How Bad was the Damage?

One Chinese fashion media platform even issued a survey to Weibo users to gauge just how much of an impact Mr. Li had on consumers’ impression of the Hermes lipstick line. 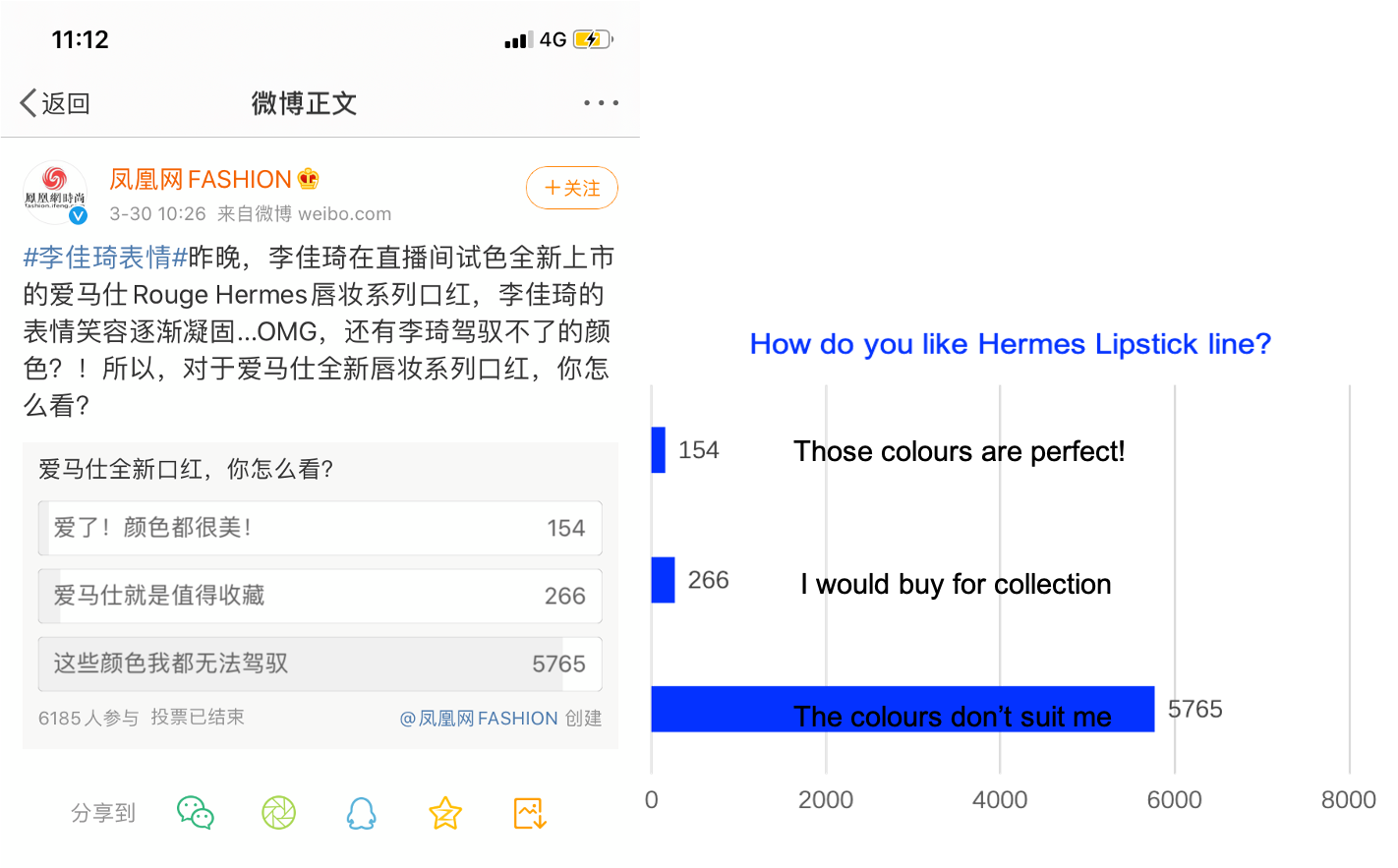 Over 6,200 people participated in the online survey, with 93% of them agreeing with Austin Li’s comments that the colors don’t appeal to them. 266 of the participants mentioned that they would buy the lipstick line just because to keep the Hermes brand in their collection, while 154 users approved of the colors.

Under the discussion area, participants left their personal opinions.

User #1: “There are many colors that are not suitable for ordinary use,” one participant wrote. “I cannot understand the reason”. 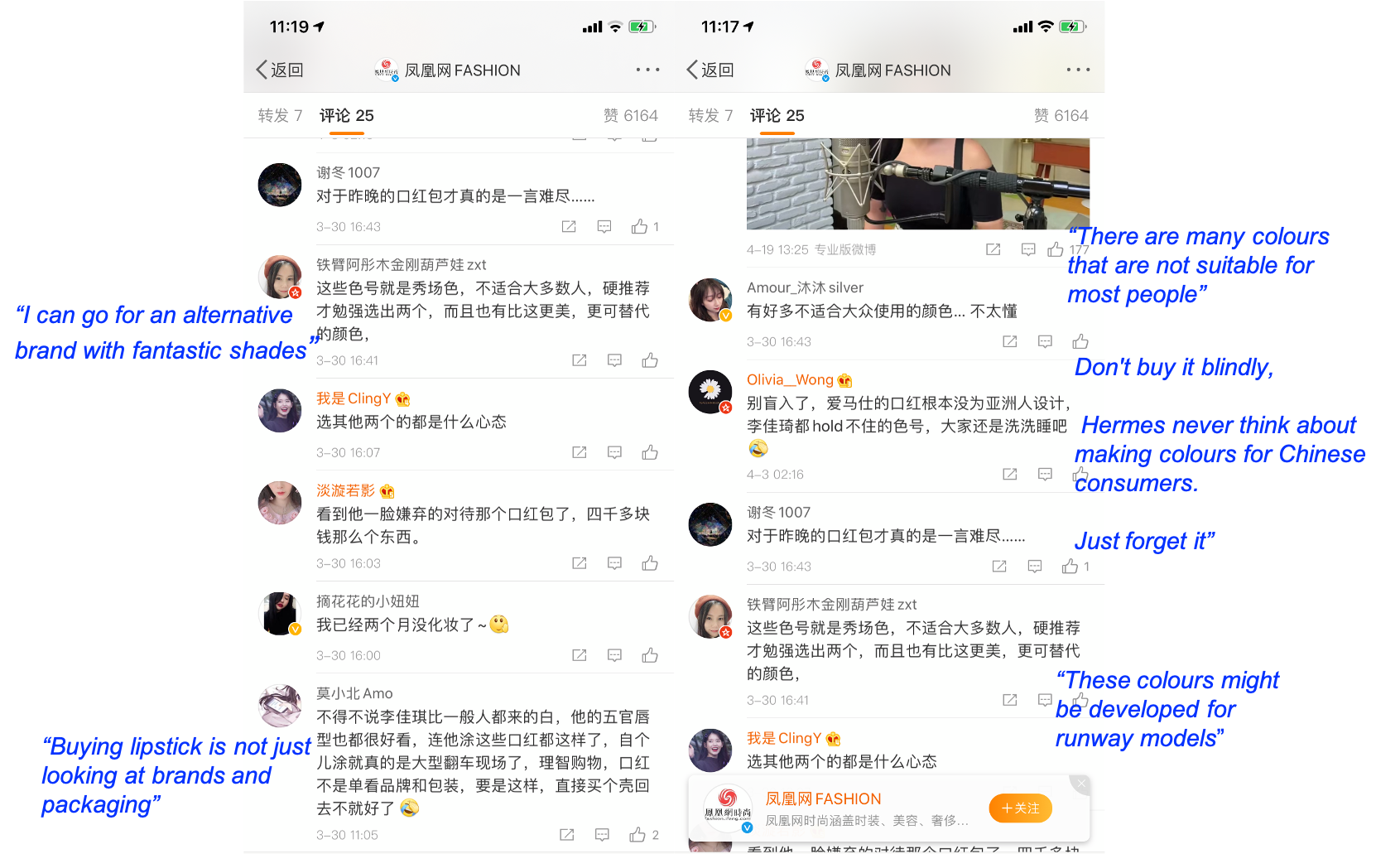 Other negative comments noted that, "These colors might be good for the runway, but aren’t not suitable for most people'; “I’d rather go for an alternative brand with fantastic shades”.

The results of the survey and ensuing comments indicate that even if the lipstick line were to be launched in China, it is highly probable that it would fail to gain traction.

How KOLs Play a Profound Role in Shaping Public Opinion

The Hermes incident indicates just how much power the King of Lipstick and other top KOLs in China have. Millions of Chinese millennials follow KOLs like Austin Li and his peers. Mr. Li himself has 15 million, 24 million, and 40 million fans on Weibo, Taobao Live, and Douyin, respectively, and many of the products he recommends sell out in just a matter of minutes.

One could argue that KOLs play an outsized role in China’s digital ecosystem, due to a few main reasons:

1.China digital advertising in general has lower ROI than in Western markets; social media platforms such as WeChat have generally preferred to make money through taking a cut of value-added services such as payments and virtual gifts than advertising. Thus, the advertising tools on them are relatively underdeveloped and less targeted than those in Western markets

2.Chinese shoppers are social shoppers, in that they often seek the approval of their peers when making a purchasing decision. This is partly due to the fact that Asian societies tend to be collective in nature, and also because the prevalence of fake or shoddy products is much higher in the China market

3.KOLs help personalize a brand and cater messaging to different types of niche user groups. In livestreaming and short video sessions, KOLs can  demonstrate how a product works and feels like in real life. They can also add their own personality and tips to cater to their fan base, which may differ  from one KOL to the next. For a product like lipstick, different customer bases may prefer a certain type of color shade over the other, and KOLs can help customers make this decision.

And yet the market for KOLs is becoming fiercely competitive, with many new wannabe KOLs entering the field. While smaller KOLs can help raise brand awareness, they are less effective at making immediate sales conversions, making it difficult to achieve a positive ROI.

Top KOLs, on the other hand, charging large fixed fees and commissions of 30% or more. Additionally, many KOLs demand that brands discount their products to appeal to their fans, with some products discounted as much as 70%.

Not to mention that other platforms are launching livestreaming commerce features of their own; over the last year, JD.com, Kaola, Xiaohongshu, WeChat, and Douyin have all jumped into the fray. It is highly possible that livestreaming becomes commoditized and ROI decreases over time.

1. Top China KOL Austin Li delivered a devastating review of Hermes’ new lipstick line, inviting negative commentary from many users across China’s microblogging platform, Weibo. Weibo even rolled out a survey which showed that 93% of participants agreed with Austin Li’s assessment and pledged never to buy the products

3.The landscape for KOL marketing is becoming increasingly competitive as new players enter the field and demands from top KOLs increase dramatically.

Why Most Foreign Brands Become Popular in China Because of Influencers