As the dynamic zero-Covid policy gradually became the norm, China's beauty market is gradually bouncing back. According to China Customs' latest data, the overall import of cosmetics and beauty products started to increase in July 2022 to 11.97 billion RMB ($1.7 billion US), up 5.18% year-over-year (YoY). Despite significant retail sales shrink in March and April this year, major global powerhouse L’Oréal managed to achieve double digits growth of revenue in June, thanks to significant growth of new channel sales. In July the company ranked 4th for top brand sales on Douyin, the Chinese version of TikTok, which has attracted 600 million active users.

The revival of beauty retail sales significantly outpaced sales in other industries. According to Euromonitor forecasts, the penetration rate of e-commerce sales channels in the beauty industry is expected to increase to 40% in 2022, and continue to expand. Douyin had become an appealing channel for beauty brands. According to data from Sinolink Securities, Douyin's beauty GMV in Q1 2022 was 9.6 billion RMB ($1.4 billion US), up 164% YoY, with the highest growth rate among e-commerce platforms.

Chinese domestic brands contribute a significant portion of beauty product sales in Douyin, as Feigua Analytics estimates that Chinese domestic beauty brands contribute around 57% of the top 20 brands’ gross merchandise value (GMV). In this article, we will analyze what C-beauty brands are doing on Douyin to stay ahead of the competition, and what international brands can learn from them.

1. HBN - Create a professional image and deepen consumers' awareness of the brand with ingredients

HBN, founded in 2019, is the newest efficacious skincare brand. As the “Morning C and Evening A” skincare concept became popular, HBN successfully penetrated the consumer market and created a deep brand impression with its retinol ingredient.

HBN has been on Douyin for 1 year, focusing on ingredient skincare. In the past six months, the brand's sales have reached 219 million RMB ($32 million US), and the monthly sales in Douyin have basically remained at 35 million RMB ($5 million US) so far this year.

In the past six months, HBN has cooperated with 1,099 Influencers in livestreaming, with a total of 18,000 sessions. Sales mainly based on livestreaming accounted for 99.75%.

In its livestreaming strategy, HBN chose to cooperate with a large number of influencers on Douyin through short video content. They conducted popular science and market education on the effect of retinol to consumers, and output brand value. The high-quality content and massive video exposure also precipitated some potential consumers who are aware of the brand, and led to sales for HBN's follow-up livestreaming, completing the full-link closed loop of Douyin's marketing.

From the perspective of the proportion of consumers, the fans of HBN’s livestreaming room are mainly females aged 18-40, accounting for 94% of the total population. The traffic of the HBN livestreaming room is mainly composed of paid traffic and organic traffic. The paid traffic accounts for 75% of the sales and the organic traffic accounts for about 25% of the sales.

In addition, HBN’s topical challenge co-created with users on Douyin has reached 1.24 billion views and gained huge exposure. In the past 90 days, there have been more than 5,000 short videos mentioning HBN, and the total interaction volume has exceeded 5 million. 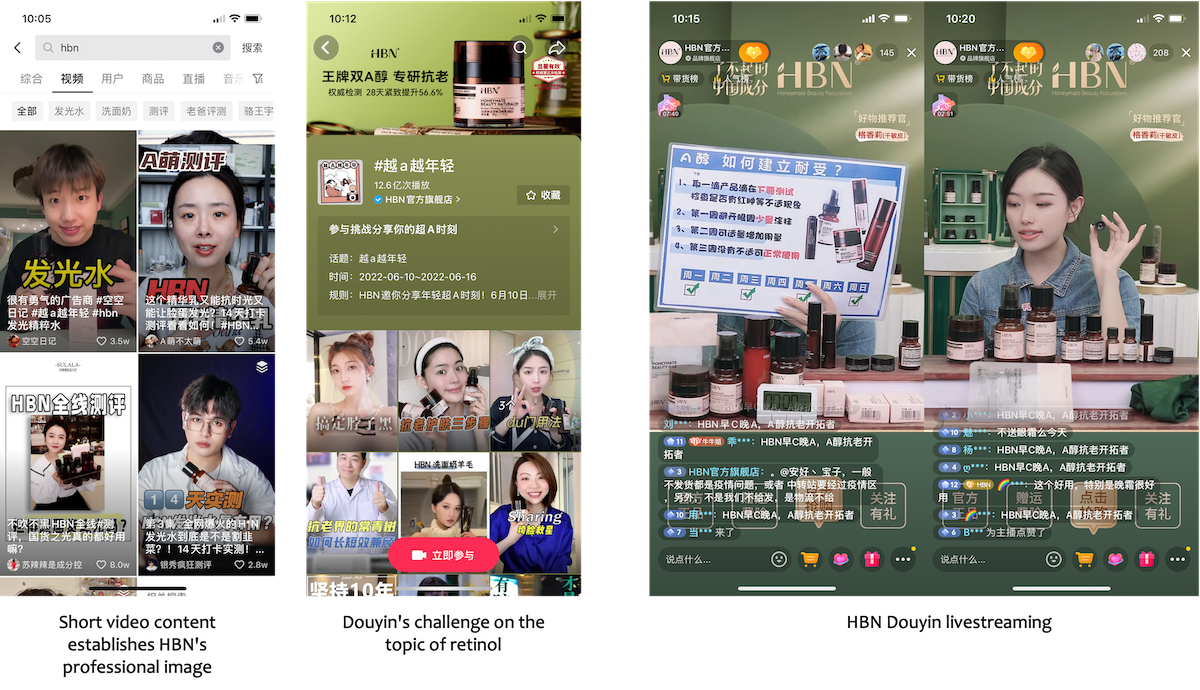 Looking back on HBN's success in Douyin, they focus on communicating with consumers, focusing on promoting the efficacy of products, and establishing a brand image. They also present the most realistic effects to consumers through human efficacy testing to gain consumer trust. In addition, HBN used Douyin's rich creators’ resources to cooperate to increase the brand's voice.

Winona, a sensitive skincare brand, was ranked as the #1 beauty brand on the first day of this year's Douyin 6.18 sales festival.

In terms of e-marketing strategy, Winona has been using Douyin and social shopping platform Little Red Book as the main media platforms. Since the beginning of May, Winona has been cooperating with over 200 influencers to build brand buzz and continue to build the atmosphere of the 618 campaigns.

Will Liu's fan base is mainly upscale, white-collar women in first- and second-tier cities, which also has a high match with Winona's consumer base. That’s why this creative marketing campaign has such a good performance effect.

In addition to this, Winona realizes the increasing importance of search advertising within Douyin. The brand makes good use of popular keywords and does a good job of attracting traffic. When users find Winona through search behavior, they can enter the official account.

When the users enter the official account of Winona, if the account is doing livestreaming, they can directly enter the livestreaming room to watch and discover the products they want to buy to directly place an order and complete the conversion. 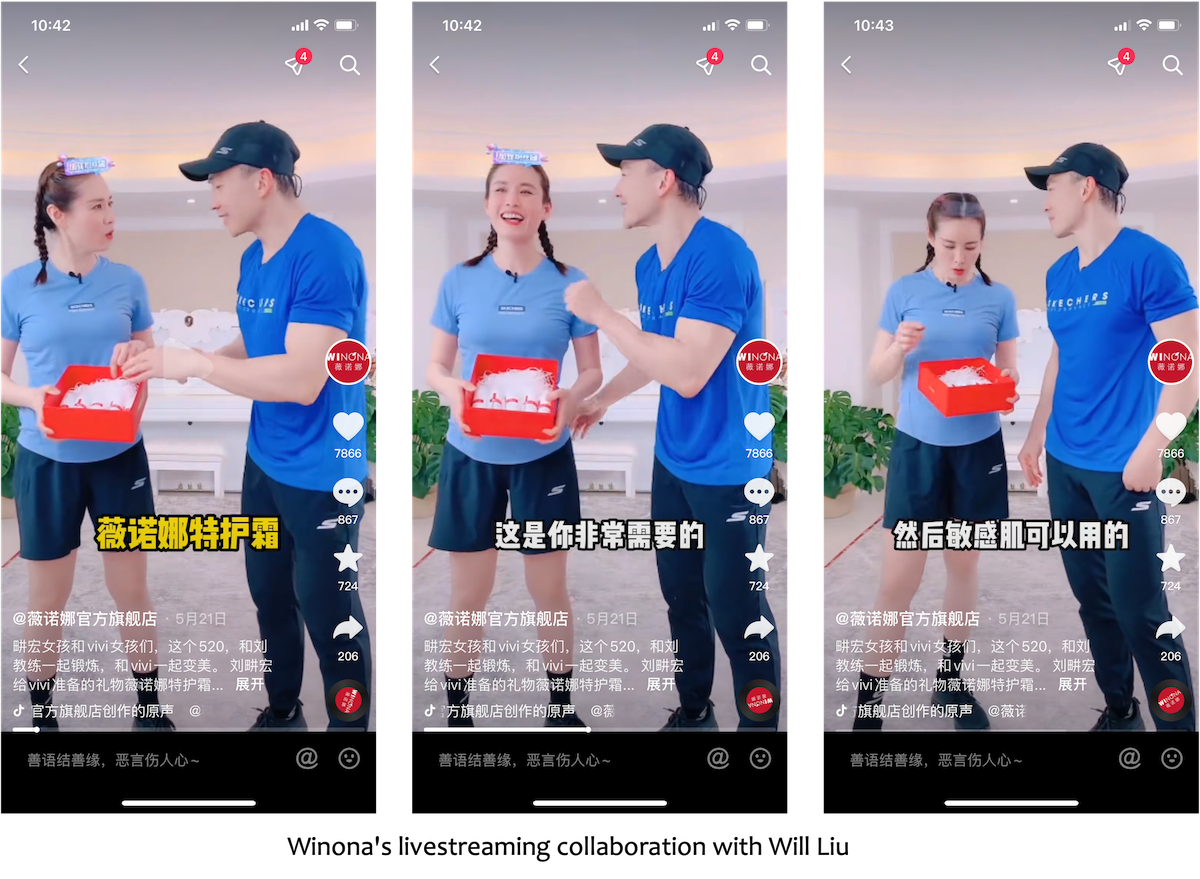 Founded in 2016, Grain Rain Skincare is a domestic efficacious plant-based skincare brand and the only Chinese brand named after the solar terms culture.

In this context, only products with high safety factors and those able to meet the requirements of new regulations and policies can stand out in the whitening segment.

In June of this year, "Douyin E-commerce New Release" and Grain Rain Skincare created a new beauty formula theme campaign, which set off a new trend in skincare among young people.

Grain Rain deeply explored the connection between the target audience and their ‘anxiety at office,’ and created the communication strategy of "MBTI + skincare ." Using the trending topic of MBTI during job-hunting seasons for new white-collar workers, Grain Rain Skincare had successfully converted relevant audiences into potential brand customers.

The reason why the Honor of Kings game has attracted more and more brand co-branding cooperation in recent years lies in the huge group of young consumers behind it. According to big data statistics, the Honor of Kings has more than 600 million users and 100 million daily active users. In the user age structure, users aged 20 to 29 account for 52.4%, and these young players are also the main force of future consumption that brands are looking for. What’s more, MOBA gaming content is extremely popular on short video platforms and reflects the targeted audience range on the platform. 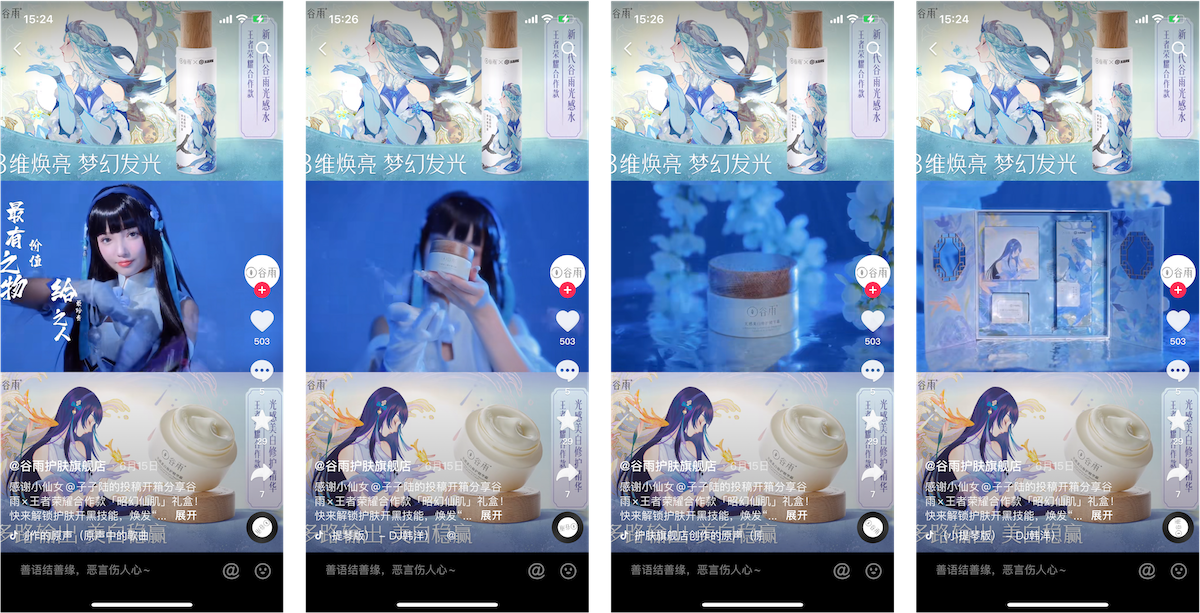 Relying on Douyin e-commerce's IP marketing and creative seeding communication, Grain Rain achieved rapid growth in sales on Big Day (Douyin's official campaign), and the brand's self-livestreaming set a historical record, with the GMV of the single self-livestreaming exceeding 1 million RMB ($145,000 US), and the paid GMV achieving a 321% increase compared to the benchmark period.

The lessons learned from local competitors

With the increasing penetration of short videos and livestreaming, brands need to rethink their communication and sales channel strategies in China. Working with Douyin to adopt closed-loop operations from the content partnership and creative ads to generate exposure, and retaining and converting potential consumers in meaningful livestreaming events seems to be the successful pattern so far – but how can global brands do better?

We think Chinese brands perform extremely well at co-creating content with creators and influencers on Douyin, seeding campaigns and livestreaming events to quickly generate and convert to revenue. Exposure and conversion must go hand-in-hand as a seamless process to make Douyin sales work.

Also, the multi-content features on Douyin attract the attention and increase the participation of younger audiences, so international brands need to try a variety of Douyin IP marketing, topic challenges, and new ideas to capture this section of the market and leverage creators’ significant reach.

When dominant Western platforms are unavailable in China, the main driver of brand awareness happens within the unique Chinese digital landscape. International brands need to keep learning about the ever-involving ecosystem and appeal to digital-savvy Chinese consumers.