Nike and Adidas, and other overseas brands sales plunge

Nike and Adidas both reported a plummet in sales on China's largest e-commerce platform, Tmall. Two sportswear giants both saw a deep plunge in their official stores in April from last year. Nike saw a decline of sales around 59%[1], while Adidas dropped by 78% YoY, indicates by data from Morningstar Analysis.  Uniqlo's April sales down over 21% compared to last year.

Early in March, a few international fashion conglomerates including H&M, Nike, Fast Retailing, officially expressed their concerns about cotton originated from the Xinjiang region, China. They claimed publicly that they would not be using Xinjiang's cotton. Such a statement has caused great controversy in China, where the state media then launched a boycott against brands that are involved in the Xinjiang statement and BCI initiative. The movement for boycotting Western fashion labels stormed major social media platforms including Weibo, WeChat, and Douyin. Scores of Chinese celebrities terminated their contracts with Western brands that opposed Xinjiang cotton which also fuel the boycott.

After the boycott event happened, support for the local brands had already been rapidly building up. While sales of international fast fashion brands and sports fashion have suffered a steep drop, native products have seen a soar.

In particular, Li Ning's sales at its Tmall flagship shop jumped by more than 800% YoY in April, with many items short in the stock. Meanwhile, homegrown fashion brands start to recruit popular Gen-Z celebrities as ambassadors, to capture the attention of the younger generation consumers. Li Ning partnered with Xiao Zhan (29 m followers on Weibo), while ANTA teamed up with Wang Yibo (38.3m followers on Weibo) to launch the 2021 Summer Collection. 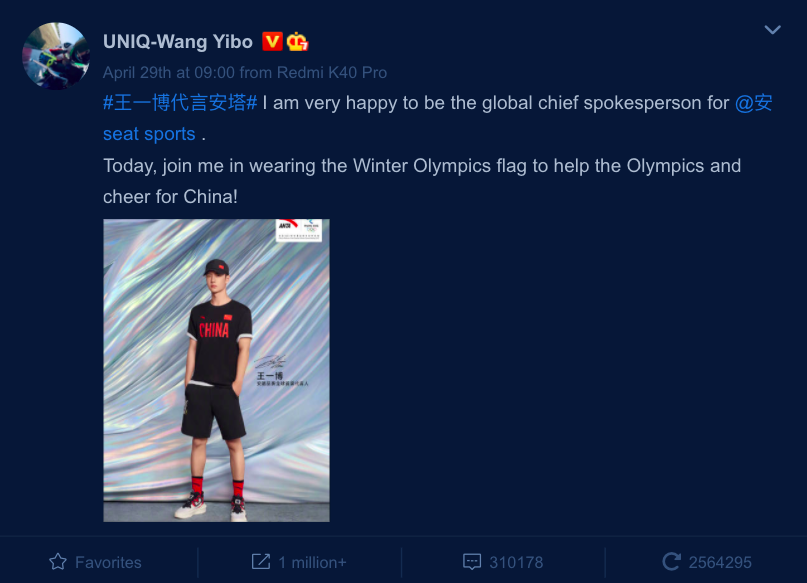 The Xinjiang boycott enhanced Chinese consumers' growing desire for "Guochao" (China-Chic) referring to the rise of hip and native Chinese brands. In recent years, the trend of "Guochao" has been challenging international brands of China market share.

Ultimately, the boycott incident can also be seen as a reshuffle for sports brands in the China market. When the top celebrities have been endorsing domestic brands, it is evident that there will be an unprecedented increase in turnover.

For international brands, the key lesson from this event is to satisfy Chinese younger generation consumer’s demand for more attention to matters such as inequality, false accusation, discrimination against Chinese nationals, and launch effective communication channels to avoid misunderstanding.

For the moment, the long-term impact of the Xinjiang controversy is uncertain. But the rise of homegrown brands will undeniably continue in short term.