The Covid-19 pandemic has forced brands and retailers around the world to shut their stores and take an introspective look at their e-commerce strategies. In China, Tmall remains supreme, and its appeal to global brands looking to launch an online presence in the country hasn’t waned. Brands such as Prada, Huda Beauty, and IKEA all launched stores on Tmall in March.

We take a look at some of these brands and the significance of their Tmall launches.

Mckinsey forecasts that China’s luxury market will grow to reach 1.2 trillion RMB by 2025. Spurred by this and the recent coronavirus crisis, Prada launched a Tmall store on March 14th of this year, partnering with the Tmall Luxury Pavilion . China now accounts for nearly 2/3 of global luxury growth and the Tmall Luxury Pavilion is Alibaba’s attempt to cater to global luxury brands, giving them more leeway to design their brand stores with larger posters and different fonts.

Luxury brands have long been loathe to partner with Alibaba, largely because of the sale of counterfeit goods on Taobao, China’s eBay-like C2C marketplace platform. Luxury goods have also been difficult to sell online at full price – China e-commerce is characterized by discounting and promotions.

Not to mention that there are no plush leather seats or VIP shop attendants to cater to the whims of top customers, making it difficult to recreate the luxury experience online.  The luxury brands prefer to run their own e-commerce stores, where they can better control the customer experience.

And yet official websites are difficult to run in China. Many internet users never purchased desktop computers and went straight to using smartphones as the country’s internet industry developed, so the habit of making purchases on a desktop website is less common in China. Prada did launch its own brand website in China in 2017, though it remains unclear how successful it's been.

Alibaba’s Taobao and Tmall platforms have since become the go-to apps for e-commerce in the country. Not only can brands launch official brand stores on Tmall, but their items can also show up in search results on Taobao, which has several hundred million users. Because of this, Tmall has the broadest reach amongst China’s internet users, whereas other platforms such as JD.com, Kaola, Xiaohongshu, etc. tend to have smaller, more niche user bases. In short, a Tmall store can act as a proxy for a brand’s official store in China. 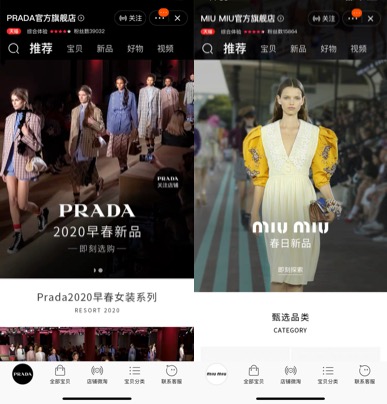 Huda Beauty is a beauty & cosmetics brand that has skyrocketed in popularity over the past few years. Founded by Huda Kattan, a beauty blogger and makeup artist, the brand focuses on aesthetics and innovation, ensuring that product lines are user-friendly and suitable for people with different skin tones. The brand has grown so popular that it now has over 40 million global followers on Instagram.  In China, it has over 20,000 posts on Little Red Book and is frequently recommended by beauty influencers.

In March the brand announced on Weibo that it was finally launching a store on Tmall Global, Tmall’s cross-border e-commerce division.  Brands typically start on Tmall Global as a launchpad into China after gaining some traction on local social media platforms; setting up a store does not require the establishment of a China entity nor local product registration processes. Many beauty brands choose Tmall Global because product registration laws in China require product testing on animals, which global cosmetics brands refuse to do, citing anti-animal cruelty principles. 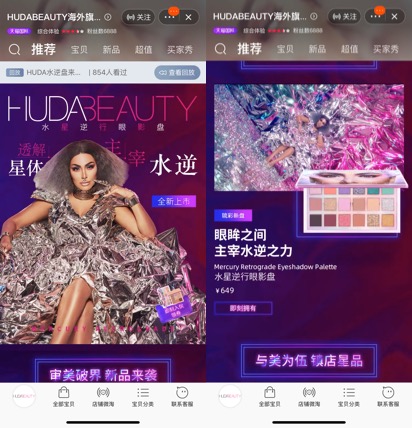 On March 10, IKEA started to sell its products on Alibaba’s Tmall, its first collaboration with a third-aprty e-commerce platform. Up until now, IKEA had had a presence in just a few Tier 1-2 Chinese cities and a relatively small online presence through its official website and WeChat mini-program stores.

In contrast, IKEA’s Tmall store offers a whopping 3,800 products, including products such as furniture, bedding, kitchen, home accessories, etc. After just a few weeks of launching, the IKEA flagship store now has more than 1.34 million fans.

And yet the Tmall store is just one aspect of a broader e-commerce push. On the same day of its Tmall launch, IKEA launched an official mobile app, where customers can make e-commerce purchases. IKEA China had previously launched an IKEA Place App earlier in 2018, which helped customers to visualize different items in different home settings, but there were no options to make direct purchases. 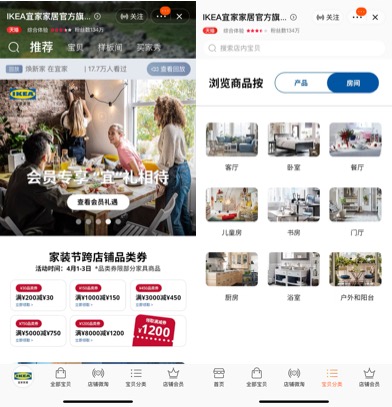 Given the heavy nature of furniture products, it is challenging for a retailer like IKEA to move its business online.  The primary issues center around logistics and after-sales services.   Adding protective cotton and foam cushioning for shipping increases the handling costs by about 15%, and the costs of shipping and on-site installation will increase by 10%. E-commerce logistics for furniture products are vastly different than that of other, more lightweight products. This is partly why Wayfair in the US has been able to create its own market for furniture e-commerce.

But now IKEA's Chinese furniture rivals EasyHome and Red Star Macalline are doing well on Tmall, having each exceeded 10 billion RMB in sales on 2019 Singles Day.  Moreover, there were over 48 home & furniture brands that brought in over 100 million RMB in sales that day. Such numbers indicate that Tmall is a platform that cannot be overlooked in China.

The coronavirus crisis has been another compelling factor. IKEA China closed all 30 branches of its branches in China at the end of January.  While its Tmall launch had been planned for quite some time, the timing of its launch was quite fortuitous. According to an online home improvement industry report released by CBNData and Tmall, demand for home & furniture items has increased over the last few months as people quarantined at home look to upgrade their living spaces. 40% of consumers surveyed ranked the living room and bedroom as their first areas of improvement.

2.    Huda Beauty also launched a store on Tmall Global in March. Huda Beauty has skyrocketed in popularity around the globe and Chinese influencers have been talking about the brand for quite some time.

3.    IKEA’s launch on Tmall comes at a good time as the coronavirus crisis forced it to close all 30 of its stores in China. Demand for home & furniture products has increased since most people have been working from home.