As the coronavirus crisis in China surpasses over 20,000 infected patients, we look back at the 2003 SARS crisis to understand how the retail industry adapted to worsening market conditions.

Many will remember that over 8,000 people were infected by SARS, and nearly 800 perished. Schools, factories, and shops were closed, and China's bustling cities quickly turned into ghost towns.

While the fatality rate of the current coronavirus is much lower at ~2-3%, the total number of cases have far surpassed that of SARS and continues to spread rapidly. It is uncertain how long this crisis will last, as SARS tapered off over the course of a few months.

But in times of crisis there are always opportunities. We take a look at the challenges Alibaba and JD.com faced in 2003 and how they overcame them, back in the early years of China's nascent internet industry. 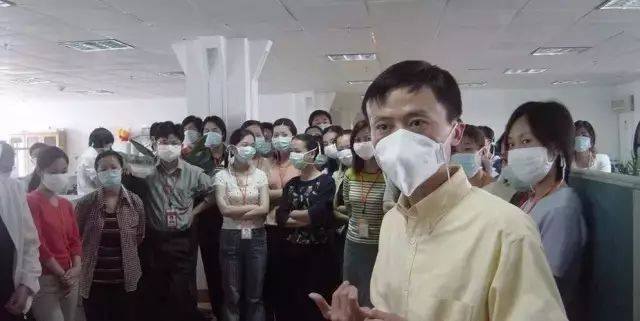 Jack Ma and the Alibaba team during the SARS 2003 crisis. Source: Sohu

In 2003 e-commerce was just starting to emerge in China. After all, not many people had access to the internet. Alibaba was primarily a B2B platform, connecting US buyers with Chinese suppliers.

JD.com was a chain of small electronics shops that launched an online e-commerce site. At the time, Richard Liu's business had just 12 offline stores in Beijing, mostly hawking electronics such as CDs and camcorders. He had plans to expand to >500 stores and become the Gome of electronics.

But business plummeted during SARS and the founder had to close all but one of his stores to conserve resources. He also resorted to selling goods by posting in QQ groups and college BBS forums.

At the time e-commerce was relatively primitive. Employees had to manually jot down orders and send text messages to customers when orders had been shipped. Employees personally delivered orders to customers who were close to the office.

After seeing some interest from users on CNbest, an internet forum, he set up a revenue-sharing agreement with the company, giving them a cut of each transaction. Sales of CDs, hard disk drives, and CD players all went up.

By New Year's Day the following year, Richard Liu officially launched his e-commerce website 360buy with ~100 products, and devoted the bulk of his resources to building his online business. This rest is history as the company quickly became one of the largest online retailers of electronics and, later, other categories in China.

How did Alibaba fare during SARS?

At the time, Alibaba was a four-year old company that focused on B2B e-commerce, matching American procurement teams with Chinese suppliers. The annual Canton Fair in Guangzhou, as many in the industry know, was and still is one of the largest expos for cross-border B2B trade in China.

An Alibaba employee caught SARS when she was sent to attend the Canton Fair in May 2003. After she returned to Hangzhou and was hospitalized, she became the number four SARS patient in Hangzhou.

While news was suppressed, many within the Hangzhou community suspected Alibaba of spreading SARS in the city, giving the company a bad name. Alibaba's 500+ employees were quarantined at home for twelve days and required to work from home.

Many countries around the world issued travel warnings for businessmen traveling to China, and thus many turned to Alibaba's online business to source Chinese goods. Starting in March 2003, Alibaba's B2B e-commerce business added 4,000 new members and 9,000 listings each day, a 3-5x increase over the pre-SARS rate.

Chinese suppliers, faced with few options, also invested more in online marketing on Alibaba's platform. Alibaba's business grew 50% that year and was seeing daily revenues of 10 million RMB. Over half of the 1.4 million suppliers on the B2B platform saw strong sales growth.

What's more is that Alibaba launched Taobao that year, with Jack Ma commissioning a secret team of six people to work on launching the platform. At the time, the number one e-commerce marketplace in China was eBay, and Alibaba had only been around for four years.

Taobao was launched in July 2003, and within two years the upstart platform surpassed eBay to be the number one C2C marketplace in China.

The examples of Alibaba and JD.com show us that opportunities can be found in times of crisis.

What is different today is that China's online e-commerce & on-demand delivery infrastructure is much more established and robust.

Restaurants, entertainment venues, and travel industry players have seen steep declines in demand. This will have a severe impact on small- and medium-sized businesses, who may have thinner margins and smaller cash piles to defend against downturns.

But other players such as fresh food supermarkets, convenience stores, and online sellers of essential FMCG & OTC pharmacetical goods may see a surge in demand as more people stay at home and stock up for emergencies.

While it's still too early to tell, players should stay cautious and focus on providing useful content and products to customers in need.

1. JD.com's Richard Liu resorted to selling electronics on internet forums and QQ chat groups to keep his business afloat during the SARS crisis. He later devoted the bulk of his resources to the online business, growing it to become China's largest online retailer of electronic products.

2. Alibaba's B2B e-commerce business thrived after foreign businessmen cancelled trips to China and began registering on its platform. The experience partly led to the birth of Taobao, which quickly surpassed eBay to become the largest C2C marketplace in China.

3. Offline retail and travel industry players will suffer today as people lock themselves at home to avoid the coronavirus. But expect online retailing of essential FMCG, OTC pharmaceticals, and groceries to see a surge in demand.

How is the Global Covid-19 Pandemic Affecting Cross-Border Shipping to China?

How Europe's Coronavirus Crisis is Affecting Cross-Border Exports to China