We review five major retailer players that have been active in the cross-border e-commerce market over the past 5 years and take a look at how both domestic and international players are capturing Chinese demand for overseas products in China.

Cross-border e-commerce in China has come a long way, having grown over the last five years to top $100 billion in transaction value last year, according to eMarketer. While imported brands have been popular amongst Chinese consumers for years, purchasing directly through cross-border e-commerce only really began to emerge in 2013-14 when the Chinese government sought to create a legitimate, direct channel for Chinese consumers to purchase imported goods, instead of through gray-market daigou agents.

For many companies, cross-border e-commerce is positioned as a highly attractive, inexpensive way to expand into the China market; its flexible nature enables overseas brands to stock goods in their home countries and ship to customers after orders come through. However, the industry has become increasingly competitive and customers are more sophisticated now. Brands and retailers have to do more to compete, especially when it comes to creating a superior customer experience.

What does it take to compete in this increasingly competitive market? How did success cases such as iHerb and Feelunique build their businesses in China? What can we learn from those that have exited the market? In light of this five year turning point in the industry and Azoya’s five-year founding anniversary, we discuss five different case studies that highlight successes and failures in the cross-border e-commerce industry, as well as practical tips and the road ahead for international brands and retailers looking to crack the China market.

iHerb, a relatively unknown US health supplements retailer, entered China early via cross-border e-commerce and quickly acclimated itself to the local market; today, it dominates cross-border sales of vitamins and supplements in China.

An early entrant to the market, iHerb’s sales took off in early 2013 when its Chinese e-commerce site began accepting Alipay for cross-border transactions; in 2014 it began allowing customers to pay in RMB, displaying prices in both RMB and USD. iHerb proved to be adept at localizing its platform for the Chinese market, translating its site into Chinese, and hiring native Chinese speakers to provide customer service.

While these attributes are a given in today’s market, five years ago they were much harder to find, and back then there were less service providers that could both deal with international clients and build a localized e-commerce platform that was completely integrated with cross-border payments and settlement methods. 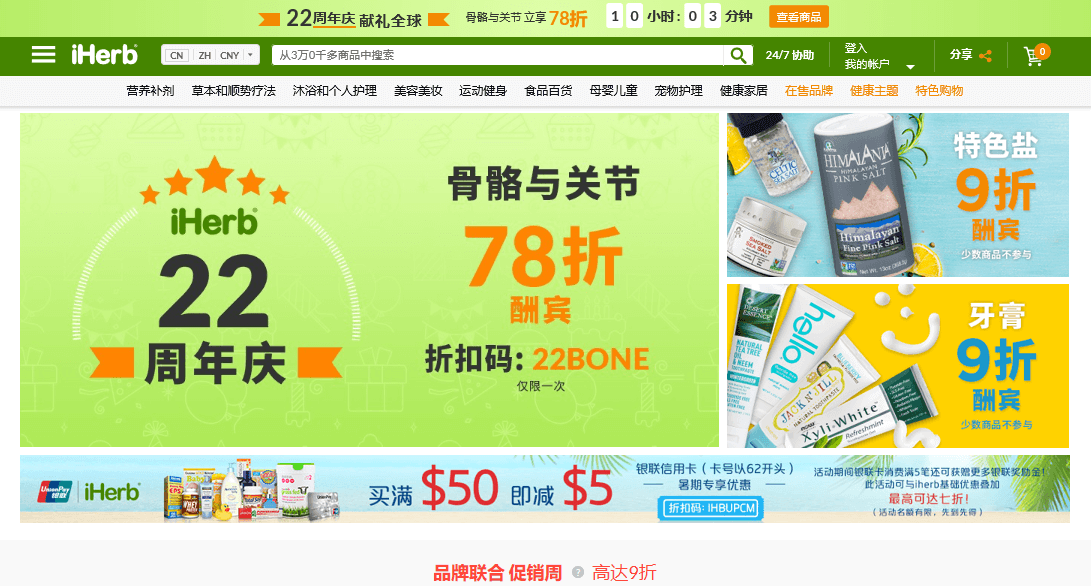 Its refer-a-friend program, flat shipping fees, and close collaboration with affiliate deals site Smzdm.com also helped it draw in Chinese customers. In the early days of cross-border e-commerce, affiliate marketing was highly successful in drawing new users to iHerb’s standalone e-commerce platform, and its cost-per-sales model provided a high return on investment for the medium-sized retailer.

While affiliate marketing is still effective today, other retailers have caught on and the costs have increased substantially. Brands and retailers should experiment with newer forms of marketing such as KOL marketing to keep up to date; they may discover a less expensive way to acquire new customers.

Lastly, iHerb was popular because it had such a wide assortment of products in the market. Today, iHerb is the go-to retailer when it comes to imported health supplements and vitamins. There is no other player that comes even close.

In short, iHerb was successful because of 1. its ability to adapt and create a localized user experience, 2. adept use of CPS-based affiliate marketing in the early days of cross-border e-commerce, and 3. its wide, attractive assortment of products. What’s more is, iHerb did all this without the help of Tmall, as iHerb did not want to adhere to Tmall’s strict return policy that consumers be able to return all items for up to 21 days, even if the merchandise had been opened.

Kaola is China’s top cross-border e-commerce marketplace, as its direct retailing model enabled it to grow to occupy 22.6% of the market, putting it in the same league as Tmall Global and JD Worldwide.

Kaola has done surprisingly well at holding its own against its bigger competitors, despite being a subsidiary of Netease, a computer games publisher with no prior e-commerce experience. This is because of Kaola’s early emphasis on direct retailing; it purchases top-selling products in bulk and stores them in its own bonded warehouses, taking responsibility for fulfillment and shipping as customers place orders. This model ensured that shipping was fast up to 3-5 days and transparent.

This is in contrast to a marketplace that delegates everything to third-party store operators. While this asset-heavy, direct retailing model requires a significant amount of capital to operate, Netease’s strong cash flows from its gaming business provides a substantial cushion.

Kaola’s direct retailing model also guaranteed lower prices by purchasing top-selling inventory in bulk (B2B2C model), passing on savings to the end consumer. As demand for cross-border e-commerce products began to grow rapidly, customers flocked to Kaola because 1. it was likely to have the most popular products in stock and 2. the prices were lower than competing platforms. In 2017 Kaola announced that it planned to purchase over three billion Euros of European products over the next three years, in order to procure high-quality, hand-picked brands.

Kaola’s success is difficult to replicate – they captured Chinese consumer demand for high-quality products, and also cut out the middle man to ensure low prices. The company spent billions to set up and optimize their supply chain, from sourcing to logistics and warehousing, creating a key competitive advantage over other domestic e-commerce players. Because its parent company Netease had substantial cash flows from its gaming business, Kaola had a strong cushion to work with.

Direct retailing and faster logistics is a growing trend that international retailers and brands will have to contend with as they seek to compete with bigger players in the market. As other platforms such as Tmall Global increasingly adopt a direct retailing model for top-selling SKUs, third-party stores will be under more and more pressure to provide a better customer experience; storing inventory in warehouses in Hong Kong or Chinese free trade zones may be necessary in the long run for certain product categories.

Feelunique, one of Europe’s largest online beauty & cosmetics retailers, entered the China market through cross-border e-commerce in 2015 with the help of Azoya. Its China business now accounts for ~20% of its global revenues.

Feelunique sells over 30,000 products from over 500 brands worldwide. In the China market, the beauty & cosmetics retailer first launched a standalone e-commerce presence in 2015, later expanding its business to include a WeChat mini-program and stores on marketplace platforms Little Red Book, Netease Kaola, JD.com, and Secoo.

This multi-channel expansion strategy was in line with the growing trend that retailers and brands should be on multiple platforms to attract different types of customer groups. While a platform such as Kaola may be suitable for targeting general customers who are more price-sensitive, Little Red Book and WeChat mini-programs are good social commerce platforms that can grab the attention of potential customers that wouldn’t have explicitly searched for a specific product in the first place or may be more interested in discovering niche brands.

Additionally, many of the cosmetics brands that sell on Feelunique’s platforms operate on cruelty-free testing principles in which they refuse to allow testing of products on animals; China requires that cosmetics brands test products on animals before they can receive approval to sell through general trade in China. As a result, many of these brands are very difficult to find in China.

Selling through cross-border e-commerce is a separate channel that enabled Feelunique to ship original products from its warehouses in Europe, without violating brands’ cruelty-free policies. This is just one example of how cross-border e-commerce can solve a key pain point for international brands looking to figure out a way to sell to Chinese consumers.

Feelunique has also been highly flexible in expanding its local reach in China, having been active with KOL marketing, pop-up stores, etc.and even going as far as to invite two KOLs to tour their facilities in London, blogging and livestreaming the campaign along the way. This drove a substantial amount of traffic and helped Feelunique grow its brand awareness in China. Since the e-commerce market in China is becoming crowded with more brands, customers are increasingly looking to key opinion leaders for advice on what to buy.

Feelunique’s experience selling in the China market leaves us with the lessons that 1. having a multi-channel strategy to expand reach is highly effective, and 2. being flexible in adopting new and creative marketing methods can be a good way to build a stronger connection with consumers who may be unfamiliar with a new retailer or brand.

Part two of this series discusses the failed cases of Metao (CBEC platform) and Asos (UK apparel retailer) in China. Click here to read on.

Could social retailing take over from e-commerce in China?