ONE Championship (ONE) is an MMA event officially launched in Singapore in July 2011. Branded as ‘Home of Marshal Arts’, ONE is Asia's largest global sports media entertainment business, which broadcasts to 150+ countries around the world, reaches more than 2.6 billion people, and works with some of the world's leading media.

ONE Group assign Azoya as an e-commerce partner to manage their official Tmall Global store, which mainly sells the products associated to the ONE Championship sports event. These includes mainly designer apparels, boxing gears, and sports accessories branded under ONE Championship.

To pay tributes to some of the boxing & sports legends, ONE also promotes a joint campaign that feature Muhammad Ali and Bruce Li, both are considered as world-renowned boxing athlete & Kungfu artist. Now Chinese audience can purchase the latest products through Tmall Global store. 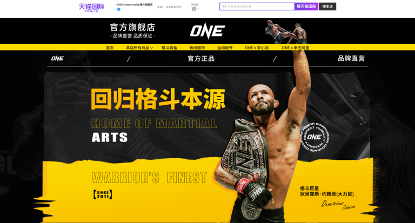