This year’s Singles Day results are in, and the data shows that sportswear is hot. Rivals Nike and Adidas were two out of just eight brands to crack one billion RMB in Singles Day sales on Tmall, beating out over 180,000 Chinese and foreign brands on the platform.[1]

The sportswear craze in China has been mainly driven by millennials, who are increasingly conscious of their health and starting to go to the gym for the first time. A study by CBN Data combed Alibaba sales data and discovered that 51% of online athletic shoewear customers were born after 1990[3]. Streetwear looks are also in vogue, popularized by China’s emerging hip-hop industry and reality shows such as The Rap of China.

Nike and Adidas pulled out all the extra stops for Singles Day this year, launching limited edition lines just for the special day.

Adidas launched a limited edition line of UltraBoost sneakers, consisting of four different versions for four different cities: Beijing, Shanghai, Guangzhou, and Chengdu. In the spirit of Singles Day, each edition was limited to 1,111 pairs of sneakers, all of which sold out quickly.

Nike also released two retro, China-exclusive Air Jordan 4 sneakers just for Singles Day[4]. This year Nike expanded its Singles Day deals to all of its platforms, including Nike.com, its SNKRS app, and its Nike WeChat mini-programs[5].

Localizing products for the China market is a good way to win over customers and demonstrate that you really care. Retailers and brands should do more to convey their dedication to Chinese customers.

The popularity of these sneaker lines reflects retro sportswear’s growing popularity in China. Old brands such as Champion and Li Ning that were popular in the 1990s are making a comeback.

Balenciaga’s retro-style Triple S sneakers, nicknamed “daddy shoes” in Chinese, shot up in popularity this past March after debuting at Paris Fashion Week. Anta, Adidas, and Skechers have each rolled out “daddy shoe” lines of their own as well.

Relatedly, sneakers are increasingly trending upscale, as the price points of many new sneaker lines tend to range between 500-1000 RMB, on par with prices in the US. This demonstrates that sneakers are becoming increasingly viewed as premium, quality products that consumers can also use to make a fashion statement. 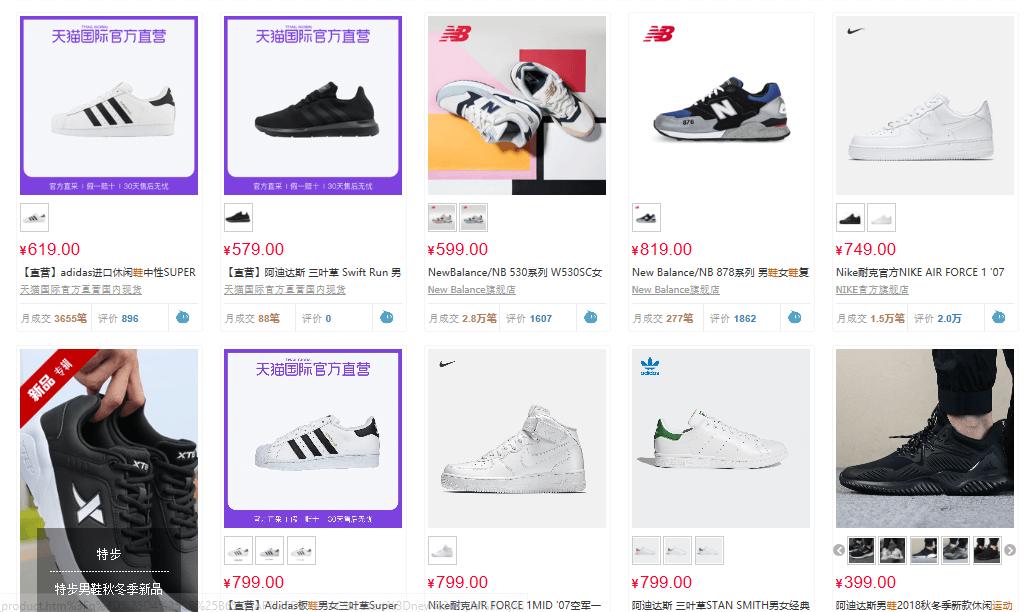 Chinese sportswear brands also performed well on Singles Day this year, with third-place Anta surpassing one billion RMB in transactions across multiple platforms for the first time. This figure was up from 670 million RMB in sales on 2016’s Singles Day.

Anta’s ambitions to grab a larger share of the sportswear market are clear, as the company has been aggressively expanding its offline retail store network throughout China.

Historically, Chinese brands have occupied the lower rung of the sportswear industry, selling sneakers priced between 100-400 RMB. But Anta is taking a different approach by purchasing foreign brands and leveraging its extensive distribution network to grow these brands in smaller cities. Anta purchased Fila’s China business in 2009 and has opened 100+ Fila stores in China.

Anta is also in talks to purchase Finland’s Amer Sports for $4 billion[7], in a partnership with private equity firm FountainVest Partners. It is rumored that Tencent may join the investment consortium as well[8]. Amer Sports owns well-known sports and outdoor brands such as Wilson and Arc’teryx, amongst others. 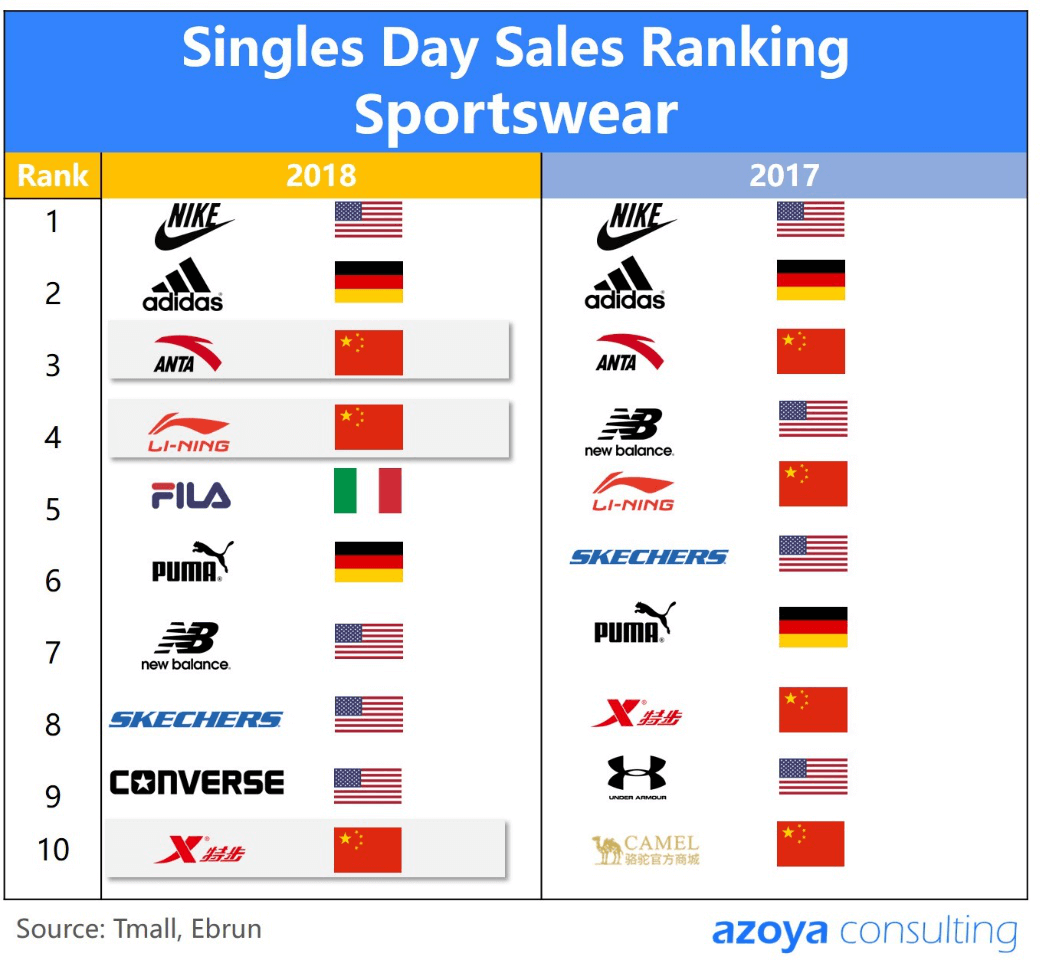 Anta-owned Fila also shot up the sales rankings this year, coming from nowhere to place fifth overall and surpassing incumbents such as Puma and New Balance. After purchasing FIla’s China business in 2009, Anta has marketed it as a younger, hipper brand catering to millennials. Not only did Fila launch the hip Fila Fusion sportswear line in June, but it also signed teen pop star and former TFBoys member Roy Wang as its brand ambassador in May.

Another noteworthy player is China’s national sportswear brand Li Ning, which nudged its way up past New Balance in the sales rankings to reach 360 million RMB in Singles Day transactions. Li Ning’s founder returned from retirement in 2014 after years of flagging sales growth, making a comeback by shutting down under-performing stores and investing in e-commerce. Li Ning’s new heritage-themed streetwear line has proved popular with millennials after making a splash debut at New York Fashion Week earlier this January[9].

Key Takeaways and Other Tips

1.     Nike and Adidas each surpassed one billion RMB in Singles Day sales this year, putting them in the same ranks as Apple and Xiaomi. This demonstrates just how much potential the Chinese sportswear market has. The two rival sportswear brands signaled their commitment to the China e-commerce market by launching their own Singles Day-branded sneaker lines. This goes to show just how important localizing products for the China market is.

2.     Retro-style sneakers are in, as revamped versions of the Nike Air Max, Adidas Stan Smith, Converse Chuck Taylor All Star 70, New Balance 574, and Vans Old School sneaker lines saw pre-orders number in the six figures. Throwback 90s style sneakers are hot nowadays, popularized by China’s emerging hip-hop industry and reality shows such as The Rap of China. Consumers are increasingly willing to pay up for quality sneakers, as many new sneaker lines are priced within 500-1000 RMB, on par with prices in the US.

3.     Chinese brands continue to move up the sales rankings and past secondary Western brands such as New Balance, Puma, and Under Armour. Chinese brands are more popular in tier 2-3 cities where they have extensive offline retail networks. While some brands such as Li Ning have played off Chinese affinity for nostalgic Chinese styles, others such as Anta have expanded their portfolio by acquiring foreign brands such as Fila. Anta has used its wide distribution network to expand Fila’s footprint in smaller cities.